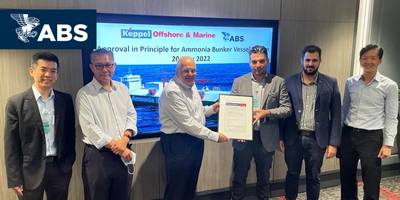 ABS issued approval in principle (AIP) to Keppel Offshore & Marine for the ammonia-fueled ammonia bunker vessel at the heart of Project Sabre, an initiative from a consortium of organizations to develop an ammonia bunker supply chain in Singapore.

The 188-m, 33,000 cu. m. ammonia bunker vessel design, which is intended to carry liquid ammonia as a carrier as well as bunker fuel for a wide variety of receiving vessels, has been reviewed by ABS against the requirements outlined in the ABS Guide for Ammonia Fueled Vessels.  The design would receive the ABS Notation ✠A1, Liquefied Gas Carrier with Independent Tanks.