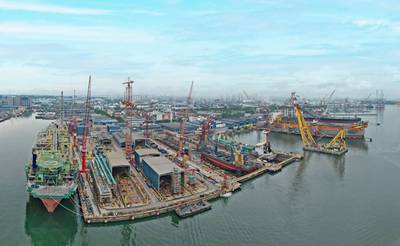 Singaporean conglomerate Keppel Corp on Thursday reported a first-half profit that rose 66%, helped by higher earnings across most of its main businesses and a rebound at its offshore & marine (O&M) unit.

Keppel, which traces its roots to a small ship repair yard corporatized in 1968, has seen its renewable energy and asset management units bounce back this year, offsetting a decline in its urban development business.

"In an extended inflationary environment, demand for real assets with cash flow, such as those which Keppel develops, operates and manages, will continue to grow," Chief Executive Loh Chin Hua said.

Business at the O&M unit, Keppel's second-biggest which it is merging which Sembcorp Marine, rebounded amid a rise in global oil prices.

The O&M division is in advanced discussions with Petrobras for up to two new floating production storage and offloading vessel projects, Keppel said, adding that the projects will potentially add more than S$8 billion to the unit's orderbook.

The unit's orderbook at the end of June was S$4.4 billion.

China's property sector has been lurching from one crisis to another and has been a major drag on the country's growth over the past year.

Keppel's profit from continuing operations attributable to shareholders, excluding O&M, some out-of-scope assets and other adjustments, rose 26.4% to S$434.1 million.