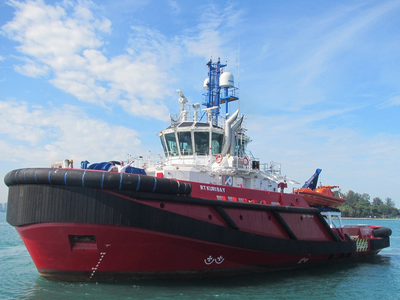 Successful trials of Inmarsat Fleet Xpress off Western Australia have persuaded global tug operator KOTUG International to select the high-speed broadband solution for this area of the Asia Pacific region.

Following trials on board the 100-ton bollard pull tug Roebuck Bay, the towage service company has confirmed that the unique Fleet Xpress combination of Ka-band, continuously backed up by FleetBroadband, has significantly enhanced both the stability of communications and available uptime.

KOTUG Corporate IT Manager Hans Boele examined requirements and assessed feedback on the trials over a six-month period. He says that the long-term company commitment to Western Australia demands a lasting connectivity solution that is “future proof and scalable”.

KOTUG uses its own antennas and smart boxes on board, while its business critical decisions are supported by IT tools that manage the business from its headquarters in the Netherlands. Inmarsat’s Mr Panken says that another compelling driver for transition to Fleet Xpress has been that it is achievable within its existing vessel management architecture.