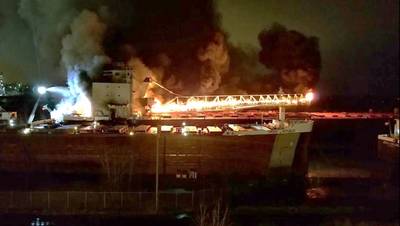 A lack of operating procedures for continuous active monitoring contributed to the extent of damage caused by a 2019 fire on board a laid-up bulk carrier in Toldeo, the National Transportation Safety Board said in a report.

At about 8:10 p.m. local time on February 16, 2019, a fire was reported on the 770-foot-long St. Clair while the vessel was undergoing winter at the CSX TORCO Iron Ore Terminal (TORCO dock) at the mouth of the Maumee River.

The fire was likely caused by the ignition of combustible material in the vicinity of an engine room workshop probably due to the use of portable space heaters or smoldering smoking materials, which spread to other areas of the vessel, according to the NTSB.

No one was on board the American Steamship Company operated laker at the time of the incident, and the fire was extinguished approximately 36 hours later by shoreside firefighters. While no pollution or injuries were reported, the estimated property damage exceeded $150 million.

At 4:45 p.m. on the day of the fire, a contracted worker checking on the cleanup at each work site within the ship noted light, white smoke in the engine room near the workshop, but attributed the smoke to burnt paint located on the lower engine room side of the bulkhead a port ballast tank, where hot work had been conducted during the day, and did not investigate it any further.

To remove the smoke, the foreman started the starboard-side engine room exhaust fan, which was a regular practice, before departing the vessel at 6 p.m. As he departed, there was still a haze of smoke in the engine room, so he left the exhaust fan on to continue to remove the remaining smoke.

According to the NTSB -- which later determined the smoke was most likely emitting from a smoldering hotspot, possibly from a burning piece of wood or trash, which eventually developed into the fire that severely damaged the vessel -- the fan caused movement of air within the engine room and may have assisted with accelerating the growth of the smoldering hotspot into a fire.

The shipkeeper in charge of monitoring the vessel during layup was at his house at the time, leaving no one on board to keep watch. The fire was not reported until after the smoke was observed at about 8:10 p.m. by the chief engineer on board another laker docked at the TORCO dock across from the St. Clair. The first fire truck arrived on scene at 8:55 p.m.

With no company policy or procedure requiring continuous active monitoring of the vessel while it was in laid up, the fire was able to expand for approximately three hours before the fire department arrived. Since most watertight doors and access manhole covers to ballast tanks remained open, there was nothing in place to stop or hinder the passage of smoke and fire.