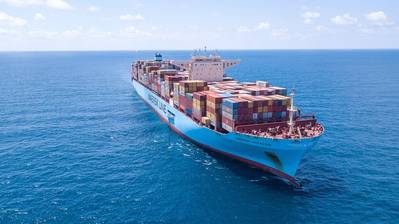 Denmark's Maersk said on Wednesday it expected its "exceptionally strong" performance in the first quarter to continue for the rest of the year, driven by high demand for shipping containers from China to the United States.

Maersk, which handles about one in five containers shipped worldwide, said there were not enough ships available in the world to meet a surge in consumer demand, resulting in record-high freight rates.

"The situation today is that our customers are trying to meet a very, very high underlying demand, while at the same time rebuilding stock," Chief Executive Soren Skou told a media call.

Large retailers and producers, including Puma and Signify, have said congestion at ports, container shortages and delays at the Suez Canal were causing problems in shipping products made in Asia to key markets.

Imports into North American from Asia rose 40% in the first three months of the year. Container ships are now waiting 16 days outside the port in Los Angeles to unload, Skou said.

"This is a huge problem for our customers," the CEO said. "It's a mess and it will take some time to clear."

The company set money aside to buy more containers but had no plans to order more ships, he said.

Skou said he expected bottlenecks in the Suez Canal, where Maersk at one point had 50 container ships waiting to pass, to be cleared by next month.

"We now expect the current dynamics to last into the fourth quarter," Skou said.

Maersk confirmed on Wednesday the 30% rise in first-quarter revenue announced in a preliminary trading statement last week and reiterated its upbeat profit outlook for 2021.

The company said EBITDA more than doubled in the period to $4.0 billion, in line with preliminary numbers.