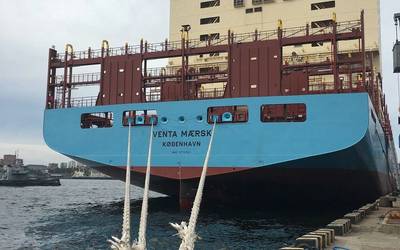 The Danish-flagged cargo ship Venta Maersk, owned by the world's biggest shipping group A.P. Moller-Maersk, has successfully passed through the Russian Arctic, in a trial voyage showing that melting sea ice could potentially open a new trade route from Europe to east Asia.

Palle Laursen, the chief technical officer of A.P. Moller-Maersk saying that the cargo vessel has made the journey as a one-off trial. “The trial allowed us to gain exceptional operational experience, test vessel systems, crew capabilities and the functionality of the shore based support setup,” he said.

Laursen said the ship, which had a cargo of frozen fish, arrived in St. Petersburg on Friday, after leaving Russia's Pacific port city of Vladivostok on Aug. 22. The vessel passed through the Bering Strait on September 6.

Venta Maersk and all systems aboard performed well in the unfamiliar environment.

The voyage went according to plan and without specific incidents. The vessel and all systems aboard performed well in the unfamiliar environment. While the passage is feasible around this time of the year and marked by a lack of obstructive ice, ice conditions in the East Siberian Sea required assistance by icebreakers.

Maersk had taken different precautionary measures to ensure that the trial was done with the highest considerations for the safety of crew, cargo, environment, and vessel. During the trial, Maersk has been in close and regular dialogue with the Northern Sea Route Administration and ice breaker companies. The crew underwent special training and was joined by Northern Sea Route certified ice Pilots during the entire transit.

Maersk underlines that this was a one-off trial designed to gain operational experience in a new area and to test vessel systems:

“Currently, we do not see the Northern Sea Route as a viable commercial alternative to existing east-west routes. In general, we plan new services according to trading patterns, population centres and our customers demand,” says Palle Laursen.

“That said, we do follow the development of the Northern Sea Route. Today, the passage is only feasible for around three month a year which may change with time. Furthermore, we also must consider that ice-classed vessels are required to make the passage, which means an additional investment.”