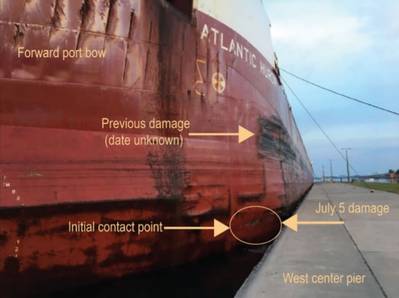 Postaccident photo of the Atlantic Huron alongside the west center pier. Point of contact and damage are indicated by arrows. (Source: US Coast Guard)

The incorrect installation of a single set screw led to the loss of propulsion control on the Canadian-flagged, 736-foot-long Atlantic Huron, causing the ship to strike a pier at 6.8 knots, the National Transportation Safety Board (NTSB) said Tuesday.

On July 5, 2020, the self-unloading bulk carrier made contact with a pier associated with the Soo Locks, in Sault Sainte Marie, Mich., resulting in $2.2 million in damage. There were no injuries.

While on approach to the locks and attempting to slow, there was a propulsion problem involving the vessel’s controllable pitch propeller system that resulted in the ship moving forward with increasing speed instead of slowing or moving astern, as ordered by the captain. In a controllable pitch propeller, the blades are not fixed in position but are fastened to the hub in a way that allows them to rotate and thereby change pitch. The blade pitch determines both the vessel’s speed and its direction.

NTSB investigators traced the problem back to a small set screw that was installed in a piece of the controllable pitch propeller machinery that controlled pitch. Vessel maintenance records show the set screw was last removed and reinstalled during a shipyard period more than four years before the accident. When the set screw was examined post-accident, technicians found no evidence that any manufacturer-required thread-locking fluid had been applied. As a result, the set screw was able to back out, beginning a sequence of mechanical failures that resulted in the ship moving ahead when it was supposed to be doing the opposite, while still indicating an astern pitch on the ship’s bridge.

NTSB investigators also noted there was a delay between the onset of the propulsion problem and the order to stop the engine.

At the time of the accident, the company’s safety management system procedures aboard the Atlantic Huron did not contain a policy addressing how to respond to a loss of propeller pitch control, NTSB investigators found. Part of a safety management system should address potential emergency shipboard situations and establish ways to respond to them. If the company provided an SMS vessel-specific policy pertaining to the loss of propeller pitch control, crewmembers trained in and familiar with the policy would be better prepared to act quickly and, in this accident, may have been more apt to stop the main engine.

“Loss of propulsion control in a critical phase of operation demands crewmembers act quickly to mitigate potential accidents,” the report said. “Due to their unique blade control, vessels with controllable pitch propellers should have specific procedures for loss of engine and loss of pitch control. These emergency procedures should be well understood and practiced by crewmembers both on the bridge and in the engine room.”