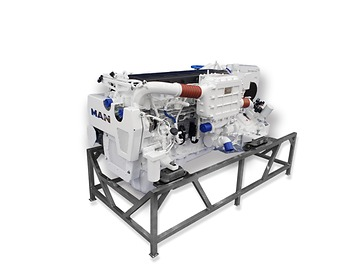 The MAN D2676 LE426 will be available in the USA, Canada, and Mexico. It fulfils the latest US EPA Tier 3 Commercial standard and comes with keel cooling.

MAN Engines is expanding its range of engines for light-duty workboats in North America by introducing an 800 hp (588 kW) inline-six engine. The D2676 LE426 will be available from the second quarter of 2020. It satisfies the EPA Commercial emissions standards and offers 70 hp greater output than the well-established, 730 hp D2676 model. For the first time, the 800 hp version of the D2676 will also offer keel cooling capability for the engine as a factory-fitted feature.

A further advantage of keel cooling is a weight reduction of up to 5% compared to heat exchanger cooled engines. With increased power, the MAN D2676 LE426 achieves an impressive power density. By making use of new injectors and a new cylinder head, the MAN engineers have increased the engine’s power by almost 10% compared to the previous 730 hp (537 kW) model. Consequently, the D2676 LE426 achieves a maximum torque of 2,674 Nm between 1,400 and 2,000 rpm from a bore of 126 mm and a stroke of 166 mm, allowing the inline-six engine to provide sufficient thrust for pilot boats, lifeboats, and fishing vessels. It also shows the broad torque plateau typical for MAN marine engines. This ensures maximum torque over a broad engine speed range at the lowest specific fuel consumption. This is supported by the modified common rail injection system, which ensures improved combustion while increasing on-board comfort due to reduced vibration and noise levels. The latest US EPA Tier 3 Commercial emissions standards are met purely by the internal design of the engine; no additional external equipment is necessary, so the MAN 6-cylinder engine does not need to sacrifice its compact installation dimensions.

The D2676 diesel engine comes with a displacement of 12.4 liters (757 cubic inches) and has proven itself many hundreds of thousands of times in both on-road and off-road applications since 2007. It was first introduced for workboats in 2015. In developing its engines, MAN Engines draws on the wealth of components and expertise gained from mass production of MAN engines for heavy duty trucks and buses. These elements are then modified for each specific application. As a result, MAN Engines can offer a selection of engines for commercial vessel applications ranging from 440 hp to 1,650 hp (324 kW to 1,213 kW), which satisfy the latest US EPA emissions standards.

MAN Engines will be exhibiting at the Pacific Marine Expo from November 21 to 23 2019 in Seattle, WA.