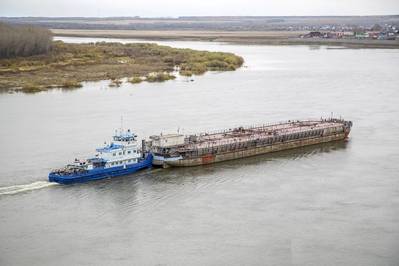 The America’s Marine Highway Program supports the increased use of the nation’s navigable waterways in order to relieve landside congestion, provides new and efficient transportation options, and increases the productivity of the surface transportation system. The program works with public and private stakeholders to achieve these goals.

“The America’s Marine Highway Program is dedicated to expanding the use of our inland waterways for freight movement,” said Maritime Administrator Mark H. Buzby. “This round of grant funding will be used to continue that expansion and ensure that our waterways are used effectively.”

Florida, South Carolina - M-95 Fernandina Express Container on Barge Service (awarded $1,291,800): Sponsored by the Ocean Highway and Port Authority of Nassau County, the grant will support the purchase of marine terminal handling equipment essential for the efficient loading and unloading for the Fernandina Express container barge service between the Port of Fernandina and the Port of Charleston. The route the service will operate has demonstrated potential for growth and the creation of an estimated 110 jobs.

Louisiana - Baton Rouge-New Orleans Shuttle of the M-55 (awarded $1,040,000): Sponsored by SEACOR AMH, the grant will be used to purchase six purpose-built barges and lease one towboat. The vessels will be used to support the growing Port Allen to New Orleans container shuttle. In addition to increasing the shuttle’s capacity, this award will help stimulate the U.S. shipbuilding industry on America’s inland waterways.

Michigan - Lake Erie Shuttle (awarded $1,101,735): Sponsored by the Port of Monroe, the grant will be used to support the Lake Erie Shuttle Service, including the purchase and installation of a crawler crane and the training associated with its use.

Oregon - Port of Morrow M-84 Barge Service Expansion (awarded $1,623,200): Sponsored by the Port of Morrow, the grant will be used to support the expansion of barge services from the Port of Morrow to Portland, Oregon; Vancouver, Washington; and Longview, Washington. The expansion will include the enhancement of two marine terminals that will ultimately allow the port greater access to the region, increasing the economic potential in this rural area.

Texas - Houston Gateway and Gulf Container on Barge Central Node (awarded $180,000): Sponsored by the Port of Houston Authority, the grant will support the development of an Operational Plan. The planning efforts and outcomes from this study will provide the necessary data to establish a business case to support shipping container movements by barge between terminals.

Virginia - Wallops Island M-95 Intermodal Barge Service (awarded $96,425): Sponsored by the Virginia Commercial Space Flight Authority, the grant will be used to design a new trestle and combination dock/ramp to support the loading and unloading of barges and research vessels at the Mid-Atlantic Regional Spaceport (MARS). The project will improve public safety, generate jobs in a rural area, and increase the site capabilities of the Mid-Atlantic Regional Spaceport.