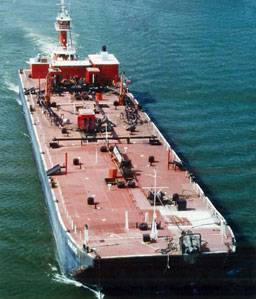 The single skin, ocean tank barge, B. No. 105, was sold to West African buyers after sellers took delivery of their newbuilding double-hull replacement.

The barge, re-named Heyden-Lamissa, was built by Gretna Machine & Iron Works, Gretna, LA in 1971.  Principal dimensions are 340 ft by 70 ft by 27.5 ft hull depth.  Cargo capacity is 12,889 tons or abt. 102,000 bbls in 10 coiled cargo tanks. Special features include a 12 million BTU self-heating system and crew accommodations for four persons.  Last service was in asphalt trade and at the time of delivery barge certificates were valid and in force.

The barge was re-flagged with St. Kitts & Nevis registry and assigned a Temporary Load Line by International Register of Shipping. New owners will utilize the barge for local coastwise trading and storage operating from their tank farm in Lagos, Nigeria.

In addition to brokering the barge sale, Marcon International, Inc. of Coupeville, WA also fixed the barge's towage from New York Harbor to Nigeria.  Donjon Marine, Hillside, NJ, is performing the tow with their twin-screw, 6,480bhp anchor-handling tug Atlantic Salvor. Marcon acted as sole broker in arranging both the sale and charter. This was the third similar barge Marcon has brokered for the Seller and the first brokered to this buyer.

Marcon has sold 11 ocean tank barges upwards of 1.49 million barrels capacity so far in 2008 and 59 similar barges totaling about 4.38 million barrels capacity since 1990. To date in 2008, Marcon International Inc., as shipbrokers, has sold or chartered 64 vessels and barges, including seven on a private & confidential basis. Sales of several additional vessels and barges are to be concluded within the next two weeks.