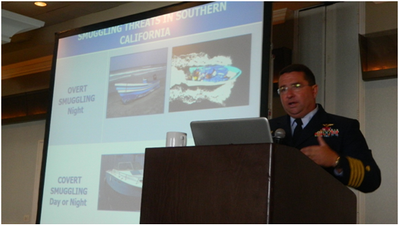 Maritime security experts from federal, state and local jurisdictions are meeting in San Diego this week as part of Maritime Security 2015 West.
Attendees from Turkey, Japan, United Arab Emirates, France, U.K., and New Zealand joined participants from across the U.S. and Canada to examine challenges and share solutions. A special tour of the Unified Port of San Diego was conducted to offer a glimpse behind the scenes of some of the port’s busy terminals handling commodities ranging from soda ash to bananas to automobiles.
San Diego is the biggest navy homeport on the west coast, and is home to major shipyards and repair facilities. The port authority is the landlord for all non-federally-owned harborfront property.
Presentations covered criminal threats including overt and covert smuggling and weapons of mass destruction; and the importance of sharing information at all levels, including the private sector.
MK Tribbie of the Department of Homeland Security’s Science and Technology Directive and members of his team conducted a “plug-fest” to allow participating solution providers of cameras, radars, sonars, and other feeds to test integration with the Integrated Maritime Domain Enterprise (IMDE), the latest information sharing platform designed to assist law enforcement and government officials maintain coastal security and vigilance.
“Homeland security is an enterprise,” said Tribbie. “Information sharing is about trust.”
The event also featured a waterside and waterborne technology showcase and demonstrations.
Delegates discussed topics such as the new liquefied natural gas carriers and LNG powered ships; port operations; and regional collaborative programs such as the Southern California Regional Coordinating Mechanism (ReCoM).
Exhibitors said the conference was worthwhile.
Kris English of Vancouver-based Xanatos, a provider of customized maritime domain awareness solutions, said the conference was valuable in connecting his company with potential customers. “I’ve been to other events, but the first night of Maritime Security West was more productive for us than some other events we have exhibited at in their entirety.”
“We’ve already had sales,” said Brian Troxel of Ascendent Technology Group of Cranbrook, BC. “And there is big potential for more sales on the horizon. The show has exceeded our expectations.”
Event sponsors included Terma North America (Gold Sponsor); Kelvin Hughes and Innovative and Signal Analysis, Inc. (Silver Sponsors) and Rapiscan Systems.