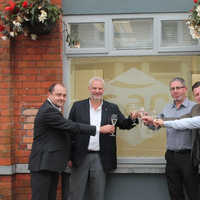 As part of its European growth strategy, the GAC Group has opened its first office in the Republic of Ireland, providing a wide range of shipping services to vessels at the country’s ports as well as in Northern Ireland.GAC Ireland provides ship agency services at all major Irish ports to a range of customers operating in sectors from tankers and dry cargo to offshore and navy vessels. Through its base in Cobh, near Cork, and the Group’s extensive regional and global network, GAC also offers customers joint agency solutions between Ireland and the UK… 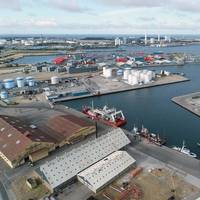 The shipping services company GAC Denmark has opened a new branch in Kalundborg to better serve the needs of GAC’s global principals in the liquid bulk and other sectors.Kalundborg, located 100 km west of Copenhagen,  is a key location for liquid and dry bulk cargo with a perfect setup for larger projects for industry players such as Equinor, Yamal LNG and Chevron.The new Kalundborg office, following the opening of a branch office in Aarhus last year and another in Esbjerg in 2015… 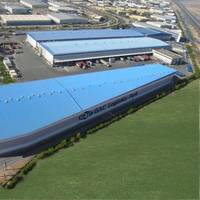 The shipping & logistics company GAC is tapping into the growing contract logistics business potential of the Asia Pacific, Indian Subcontinent and Middle East, with plans to further develop and expand in its operations in the regions.That was the message Lars Bergström, GAC’s Group Vice President for Asia Pacific & Indian Subcontinent, had for the Group’s Contract Logistics Solutions experts who gathered in Colombo, Sri Lanka, to chart GAC’s strategy to increase its share of the business in their regions.

GAC Forwarding & Shipping (Shanghai) has changed its name to GAC (Shanghai) after more than a decade since its establishment, said a press release.Managing Director Simon Xu says the renaming comes after the company has established a firm foothold in the country’s competitive shipping and logistics sectors. The name change is timely, riding the wave of a rising demand for ship agency and logistics services.“Over the years, our range of services has evolved to meet the changing needs of our customers,” he adds. 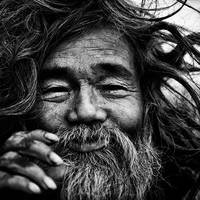 The GAC Group has appointed industry veteran and current Chair of the Swedish Shipbrokers Association, Johan Ehn, as Managing Director of its operation in Sweden.Ehn started his career in shipping in 1989 when he joined Swedish Maritime AB, and subsequently gained logistics expertise as a partner in a freight forwarding business, before establishing his own company. He also served as Managing Director of Georg Hansen AB, and Head of Commercial with APL line in Gothenburg. In addition to his active role in the Swedish Shipbrokers Association… 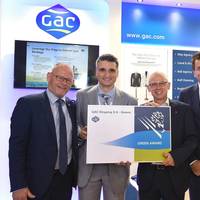 GAC Greece has become the latest GAC company to sign up to the Green Award (GA) Foundation’s scheme, underlining its commitment to environmental issues. Under the scheme, GA-certified ships that use GAC's ship agency services at Greek ports can claim a 10% discount on the company’s agency fees. By joining the incentive scheme, GAC Greece demonstrated its commitment to applying and promoting measures to encourage green shipping. The Green Award Foundation is a non-profit, independent international platform for the maritime industry to stimulate safer…

US-based Chevron Shipping Company (CSC) has awarded  the Dubai-based GAC Group a global three-year ship agency contract for both crude and LNG vessels. The new agreement secures the provider of shipping, logistics and marine services GAC’s status as Chevron’s exclusive global agent in a partnership that spans more than 20 years, more than 15 of which have seen GAC as its sole global agent. Operations will be overseen by GAC Hub Agency offices in Dubai, Houston and Singapore with support from GAC’s network of offices and approved agents worldwide.

GAC Fujairah has been awarded a husbandry contract by the Kuwait Oil Tanker Company (KOTC) to provide ship supply services, spare parts handling and a range of other logistical services to its vessels arriving in Fujairah, Khor Fakkan and Singapore anchorage. As part of global shipping, logistics and marine services provider GAC Group, GAC Fujairah worked in close cooperation with the Middle East Regional Office in Dubai and GAC Singapore to secure the deal. Under the contract…

Forecasts and route planning tools from GAC-SMHI Weather Solutions are playing a key role in a European Union initiative to promote safer and more efficient shipping. The Sea Traffic Management (STM) Validation Project, developed by a European Consortium led by the Swedish Maritime Administration, aims to make merchant shipping safer, smoother and more efficient by tackling the fact that international shipping remains relatively unregulated. The route chosen by a ship is often unknown to other vessels – something which can increase the chances of collisions, near misses, congestion and delays. 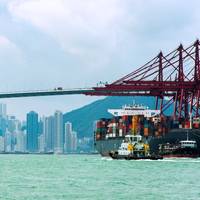 Shipping, logistics and marine services company GAC is approaching turbulent global markets with a push for greater innovation and flexibility, according to GAC Group President Bengt Ekstrand. Dubai-headquartered GAC said it has maintained a solid balance sheet despite slumps in key markets such as shipping and oil and gas. During a conference of GAC company managers in Dubai, Ekstrand outlined the group’s approach for the next five years. “Disruptive forces are reshaping our markets almost on a weekly basis but in the process, new opportunities for growth are coming into view,” Ekstrand said.

Europe’s largest port is the latest to allow the GAC EnvironHull’s eco-friendly hull cleaning system to operate in its waters. The launch of HullWiper at Rotterdam, widely acknowledged as a pioneer in innovation and shipping technology, was marked by a panel discussion, webinar and live demonstration. The Port of Rotterdam’s Senior Manager, Peter Mollema, said the ground-breaking technology exactly aligns with Rotterdam’s ambition to be the most sustainable port of its kind. “In…

GAC Russia said it is expanding eastwards with the opening of new branches at Nakhodka and Yuzhno-Sakhalinsk to meet demand for shipping services as opportunities open up in Far East. According to GAC Russia, this means it is the only ship agent with a presence throughout the interconnected Arctic region and Far East: at Murmansk, Kandalaksha, Sabetta, and now Nakhodka and the capital of the Sakhalin region, Yuzhno-Sakhalinsk. Arkady Podkopaev, GAC Russia’s General Manager, said, “GAC has been active in Russia since 2001 and has built a strong network of offices in the European part of the country. As the Russian Federation focuses on developing political and economic relations with the Asia-Pacific region, the country’s Far East has moved to the top of the agenda.

As Team Britannia prepares for its bid to break the round-the-world powerboat record later this year, GAC has been named their official shipping and logistics partner. GAC will draw on the local contacts and expertise of its network of global offices and partners to provide the 80ft powerboat and its 12 strong crew with all the food, fuel and stores needed to complete the 23,000 mile voyage. The first-hand experience of the Group’s yachting and marine leisure experts at GAC Pindar Superyacht Services will also come into play for meeting the specific needs of the boat during its voyage.

GAC EnvironHull has announced that its pioneering hull cleaning system, HullWiper, will be available to shipowners berthing in the Port of Rotterdam next month. HullWiper - which will be demonstrated at an event co-hosted by GAC EnvironHull and the Port of Rotterdam at the port on 23 June - is a diver-free remotely operated vehicle (ROV) that eliminates the need for divers to clean the vessel, cutting costs and reducing the risk to human life. Unlike other cleaning solutions, HullWiper uses seawater under high pressure as a cleaning medium… 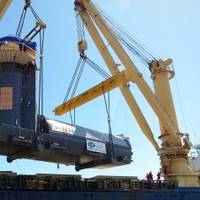 The acrylic and steel structure for the world’s biggest underwater restaurant is on its way to the Maldives, thanks to GAC’s project logistics expertise. The restaurant, complete with its 13-meter-high stairwell, is heading for the new resort Hurawalhi, where it will offer guests an underwater dining experience with panoramic views of surrounding marine life, including replanted corals, when it opens in August this year. Food will be prepared on land, then transported to the 24 guests waiting in the dining area further below sea level than any other underwater restaurant in the world.

The International Maritime Club presented Meena Mathews, GAC’s Regional P&I Manager for the Middle East, with its Excellence in Marine Claims Management accolade at the IMC Excellence Awards ceremony at the Ocean Blue in Sharjah, UAE, this week. Mathews was nominated by the Club’s committee of industry specialists for her work in protection and indemnity and insurance over the last year. She received her award from The Dubai Council for Marine & Maritime Industries (DCMMI) Chairman, H.E Khamis Juma Buamim.

GAC announced a new add-on to its GACtrack, aiming to give more job transparency and greater job control to ship agency customers. As well as being able to view job information from multiple offices on one screen, customers can check costs and export service information; view (and query if necessary) vessel line-up information; see updates on job status, including estimated timings of arrivals, departures and services to be provided and advise changes to services where required. Details can be viewed by clicking the ‘Jobs’ screen, which contains information about the supplier, the person who requested the service and a remarks section. Services provided are listed with estimated and actual costs, in real time, ensuring no surprises when the final bill arrives.

GAC Dubai’s introduction of a suite of practical innovations to improve safety in working conditions and reduce the company’s carbon footprint has won it the Group Chairman’s Award for HSSE (Health, Safety, Security and Environment) Excellence for 2015. 35 entries were received for the annual Award, which for the first time extended its scope from the previous focus on the environment to also encompass health, safety and security measures. That extension reflects the importance of HSSE compliance in the diverse sectors the GAC Group serves.

Military veterans will soon have another outlet to channel and share their experiences, on a restored wooden yacht in California, thanks in part to GAC worldwide. The GAC Group’s five regions have donated to support the Wooden Boats For Veterans foundation (WBFV) – an organization that helps veterans harness their power of past military experiences. The foundation currently has two boats in operation and is in the process of restoring a 1938 wooden yacht, ‘Clover’, itself a veteran having seen service in the English Channel during World War II. 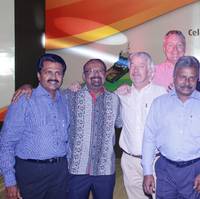 GAC India has celebrated 30 years of operation in the country with an event held at the Trident, Bandra Kurla Complex. GAC Shipping (India) Pvt. Ltd. was the first GAC office to open in the Indian Subcontinent. Operations began in 1985 with the first agency appointment for a vessel calling at Mangalore. From just two staff working from an office in Cochin back then, GAC India has now grown into a company with close to 400 employees nationwide. Fredrik Nyström, Group Vice President…

GAC to Showcase Bespoke Services for Gas Carriers at Gastech

GAC is showcasing its full range of ship agency and related services for gas carriers at the Gastech, where GAC’s groundbreaking ‘HullWiper’ ROV system will also be on display. Launched in late 2013, the HullWiper Remotely Operated Vehicle (ROV) system offers an eco-friendly, diver-free and highly efficient hull cleaning solution that helps LNG carriers to save time and money on their hull cleaning requirements in port. GAC Group has highlighted the growing importance for LNG…