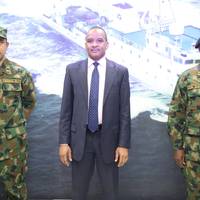 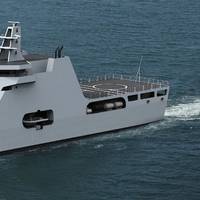 Dutch shipbuilding giant Damen Group said that its Damen Shipyards Sharjah (DSS) in the United Arab Emirates held a keel-laying ceremony for a new landing craft (LST 100) ordered by the Nigerian Navy.A press release from Damen said on February 17, 2020 said that the ceremony took place in the Sahrjah Hamriyah Free Zone on December 9, 2019.The start of the vessel’s construction was attended by Nigeria’s Chief of Naval Staff, Vice Admiral Ibok-Ete Ibas.Damen has designed the Landing Ship Transport 100 (LST 100) for a range of duties including amphibious operations… 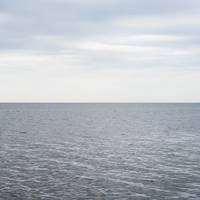 Pirates have kidnapped 19 crew members from a crude oil tanker off Nigeria in an area where acts of piracy are on the rise, an official with the ship's operator said on Thursday.The loaded vessel, the Nave Constellation, was attacked 77 nautical miles off Bonny Island on Tuesday and 18 Indians and one Turk from the crew were seized, the official said.Seven other crew members remain on board the vessel. Neither the vessel nor the cargo were damaged, the official said.The shipping… 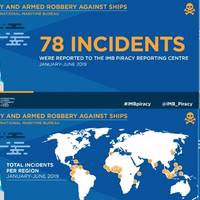 The seas off West Africa's coastline are now the most dangerous in the world for shipping, the International Maritime Bureau’s (IMB) latest report revealed.According to the report, of the 75 seafarers taken hostage onboard or kidnapped for ransom worldwide so far this year, 62 were captured in the Gulf of Guinea – off the coasts of Nigeria, Guinea, Togo, Benin and Cameroon.The IMB Piracy Reporting Center (IMB PRC) recorded 78 incidents of piracy worldwide and armed robbery against ships in the first half of 2019, compared with 107 incidents for the same period of 2018.

Concerns raised by various industry bodies were supported by figures from the International Maritime Bureau showing that the number of attacks in the Gulf of Guinea region had doubled in 2018.There has also been a marked increase towards kidnapping for ransom and armed robbery incidents.Members of the shipping community, Flag States and Agencies from Gulf of Guinea gathered at the Headquarters of the International Maritime Organization (IMO) for a day-long symposium on Maritime Security in the Gulf of Guinea. 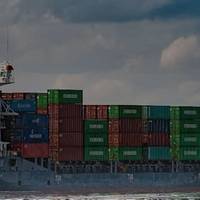 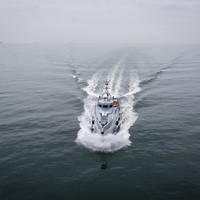 Homeland Integrated Offshore Services Ltd (Homeland) of Lagos, Nigeria, has taken delivery of another Damen 3307 Patrol Vessel for operations in the offshore oil fields in the Gulf of Guinea. This takes the total delivered vessels/Guardians since the first arrived in early 2014 to four. Guardian 4 has joined its three sister ships in providing security services to the oil majors active in Nigeria’s territorial waters, together with additional support services including crew transfers and equipment deliveries.

In line with the recent approval by the Federal Executive Council (FEC), the Nigerian Maritime Administration and Safety Agency, NIMASA is set to acquire strategic maritime safety and security assets, which are also in line with the total spectrum of maritime security strategy. The Director General of NIMASA, Dr. Dakuku Peterside who made this known in Lagos recently, also announced the establishment of a command and control center as part of the strategic initiative. “The four components of the initiative are situational awareness… 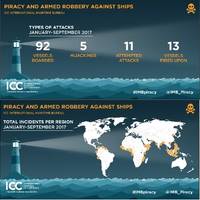 A total of 121 incidents of piracy and armed robbery against ships were reported in the first nine months of 2017, according to the International Chamber of Commerce's (ICC) International Maritime Bureau's (IMB) latest quarterly report on maritime piracy. The flagship global report notes that, while piracy rates were down compared to the same period in 2016, there is continuing concern over attacks in the Gulf of Guinea and in South East Asia. The increase in attacks off the coast… 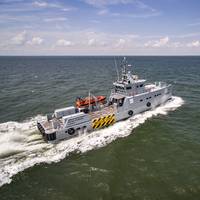 A Damen 3307 Patrol Vessel has been delivered to Homeland Integrated Offshore Services Ltd of Lagos, Nigeria, taking its fleet of these craft up to three, with a fourth currently under construction. Guardian 3 along with its sister ships Guardian 1 and Guardian 2 is now providing security and other support services to the international offshore oil companies active off the coast of Nigeria in the Gulf of Guinea, in cooperation with the Nigerian Navy. The Guardian series of 3307 Patrol vessels are themselves unarmed… 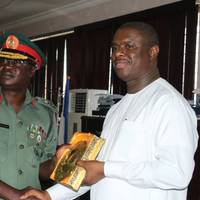 The Director General of the Nigerian Maritime Administration and Safety Agency (NIMASA) Dr. Dakuku Peterside has stressed the strategic importance of security agencies to the achievement of safe and secure shipping and a viable and vibrant maritime sector for the country’s benefits. The Director General who stated this while playing host to the General Officer Commanding (GOC) 81 Division of the Nigerian Army, Major General Peter John Dauke at the Agency’s Headquarters in Lagos said that as the Agency strives to achieve a secure maritime environment… 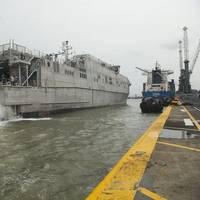 The Director General of the Nigerian Maritime Administration and Safety Agency (NIMASA) Dr. Dakuku Peterside has assured Nigerians and the international maritime community that the Federal Government is actively working to keep the menace of piracy and other illicit crimes in check on the nation’s territorial waterways. In this case the word are backed by action and investment, as the Nigerian government has approved the procurement of three helicopters and 12 fast intervention…

Maritime Piracy on the Rise -Report 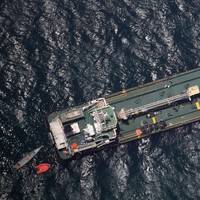 Pirates and armed robbers attacked 43 ships and captured 58 seafarers in the first quarter of 2017, slightly more than the same period last year, according to the latest ICC International Maritime Bureau (IMB) piracy report. The global report highlights persisting violence in piracy hotspots off Nigeria and around the Southern Philippines – where two crew members were killed in February. Indonesia also reported frequent incidents, mostly low-level thefts from anchored vessels. In total, 33 vessels were boarded and four fired upon in the first three months of 2017.

The Nigerian navy has arrested 10 suspects after intercepting a vessel carrying stolen crude oil off the coast of the Niger Delta, a senior military official said on Wednesday. The suspects - a Nigerian, two Pakistanis, three Ghanaians, one Indonesian, one Beninois and two Ukrainians - had siphoned about two thousand metric tonnes of crude oil from a loading facility belonging to Shell Petroleum, the official said. "The suspects were caught in the early hours of Tuesday while siphoning crude oil into the vessel from Afremo A platform, a loading jacket belonging to the Shell Petroleum and Development Company in Forcados River," Navy Commodore Ibrahim Dewu, commander of the NNS Delta, said in a statement.

Pirates have kidnapped seven Russians and one Ukrainian after attacking the cargo ship the BBC Caribbean off the coast of Nigeria, the Russian embassy said on its official Twitter account. The embassy has asked Nigerian authorities to assist in locating the abducted people, it said late on Tuesday. The Nigerian navy and police were not immediately available for comment. The general cargo vessel BBC Caribbean is managed by Briese Schiffahrts. "The armed pirates approached (the vessel) in a boat, captured the crew and left on the boat at the direction of the Nigerian shores," said Pavel Fedulov, the director of a Briese Schiffahrts subsidiary in St Petersburg, according to Russian news organisation RBC. No firearms were used during the attack, he was quoted as saying.

Pirates have attacked the Liberian-flagged 4,360 TEU CMA CGM Turquoise, kidnapping two crew members off the coast of Nigeria, with the remainder of the crew said to be safe. Turquoise, managed by Dioryx Maritime Corp. in Greece, was stormed late on Monday as it travelled between Nigeria's commercial hub Lagos and Douala in Cameroon. According to Ghana-based antipiracy agency Maritime Trade Information Sharing Centre (MTISC-GOG), the ship  was boarded in waters about 30 nm off the coast of the Niger Delta.

Six crew members  of a Turkish cargo ship have been kidnapped by pirates in the Niger Delta, according to Nigerian Navy spokesman, Chris Ezekobe. The ship carrying chemicals was believed to be travelling from Gabon to Ivory Coast. The pirates attacked the ship late at night as it was sailing close to the oil-rich Niger Delta. “All the six Turkish crew members, including the captain of the vessel, the chief officer and the chief engineer, were abducted by the attackers,” Ezekobe confirmed. The spokesman said the navy was going to board the vessel to speak to other crew members.

Six Turkish members of a cargo ship's crew have been kidnapped by pirates off the coast of Nigeria, a spokesman for the Nigerian navy said on Monday. The crew members of the merchant tanker M/T Puli were abducted some 90 miles from the coast at around 1:30 a.m. (0130 GMT) on Monday, navy spokesman Chris Ezekobe said. "Six crew members were abducted. They included the captain, the chief officer and chief engineer," Ezekobe said. The spokesman said the navy was going to board the vessel to speak to other crew members. Last month, Nigeria and Equatorial Guinea agreed to establish combined patrols to bolster security in the Gulf of Guinea. The gulf is a significant source of oil, cocoa and metals for world markets, but pirates pose a threat to shipping companies.

Dryad Maritime's COO, Ian Millen says that when looking at the volume of maritime crime and piracy events, the numbers drive you toward Southeast Asia. With a 10% rise in 2015 incidents, when compared to 2014, the area leads the crime league table. It’s worth noting that much of the reported crime is of the less serious type (eg. theft of ships’ stores etc), but this does sit alongside more serious vessel hijack for the purposes of refined product cargo theft – and we saw a spate of this last year.

The Nigerian Navy has foiled an attempt by suspected pirates to hijack and abduct 25 foreign nationals aboard a container ship operated by A.P. Moeller-Maersk A/S carrying general cargo to Nigeria with 25 sailors on board, say local media. Executive Officer of the Nigerian Navy Ship (NNS) Pathfinder Navy Capt. Olusegun Soyemi, said  at Onne Port in Rivers State, that the vessel berthed safely with the rescued crew members unharmed. According to Soyemi, “On Jan. 5 at about 08:00 hours…

Is China Building a Naval Base in Africa?

Recently, The Namibian reported the existence of a "confidential letter from Namibia's ambassador to China, Ringo Abed, to Namibia's foreign minister stating that 'a Chinese delegation will visit Namibia ... for discussions ... The reports say that Beijing has told Namibian diplomats that a "Chinese naval presence will deter any would-be illegal trawlers and smugglers.”  China's Indian Ocean-based "string of pearls" naval base strategy to protect the country's 21st Century vision of a "maritime silk road" looks like it may now extend all the way to the South Atlantic.

On Monday, 19th October, armed pirates attacked and boarded a refrigerated cargo ship underway off the Niger Delta. They stole ship’s cash, destroyed equipment and kidnapped four crewmembers before escaping. Authorities have been notified. There are currently no details relating to the identity of the attacked vessel or the location of the kidnapped crewmembers. This is the first incident reported at sea off the Niger Delta in five months and has taken place 100 NM further west than the spate of kidnappings which took place earlier this year. 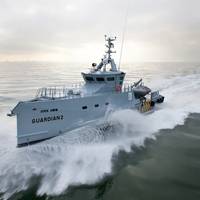 Homeland Integrated Offshore Services Limited (HIOSL) will take delivery of its second Damen Fast Crew Supplier 3307 Patrol, 18 months after a sister vessel entered service in the Nigerian offshore market. Established in 2006, Lagos-headquartered HIOSL serves the Nigerian oil and gas industry with a range of maritime, security and logistics services. Currently undergoing sea trials in Singapore, Guardian 2 is expected to be directly employed when she arrives in Port Harcourt, Nigeria, in December. HIOSL will then have five patrol vessels in its fleet.