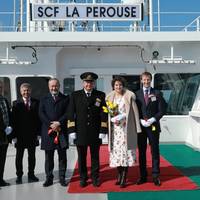 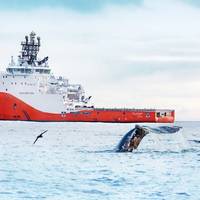 Russian oil and gas exploration company Gazprom Neft has completed ecological monitoring of grey whale populations at the Ayashsky license block, offshore from Sakhalin Island, with expedition members registering more than 550 animals in the course of a five-month survey.According to a press release, the ecological monitoring of grey whales in the Sea of Okhotsk forms part of a joint programme being implemented by oil and gas companies operating in Sakhalin. Gazprom Neft joined the programme in 2017… 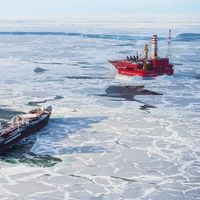 FESCO Transportation Group, the largest intermodal transport operator in Russia, announced that the ice-class container vessel “FESCO Magadan”, with full capacity of 822 TEU, joined its fleet."The flag of the Russian Federation was solemnly raised on the ship on July 2, the day of the formation of the city of Vladivostok," said a press note from the public transportation and logistics company.The container ship will be operated on FESCO cabotage service “FESCO Magadan Line”. The launch of this container carrier on “FESCO Magadan Line” is scheduled for August… 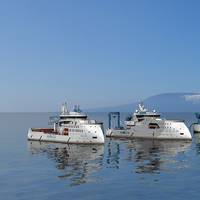 As the North American offshore wind model evolves, it is clear that fit-for-purpose, Jones Act compliant and Arctic ready tonnage will need to be part of the equation. If so, we’ve got that box checked, with a little help from Europe.As of September 2018, the Walney Extension off the United Kingdom is the largest offshore wind farm in the world at 659 megawatts. There are at least 70 major wind farms, each with hundreds of wind turbines, each generating as much as 10 megawatts in offshore England, the North Sea, Russia and China. 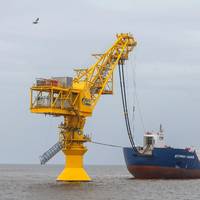 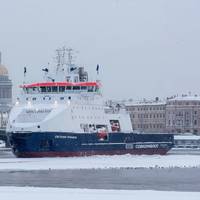 A ceremony raising the flag of the Russian Federation and naming a new multifunctional icebreaking platform supply vessel, Yevgeny Primakov, took place on February 3, 2018 in Saint Petersburg. The vessel was built by Arctech Helsinki Shipyard, a subsidiary of the United Shipbuilding Corporation; technical supervision was carried out by the Russian Maritime Register of Shipping (RS), which assigned the vessel a high ice class – Icebreaker6. Yevgeny Primakov’s design and construction… 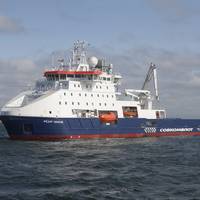 Russia’s PAO Sovcomflot (SCF Group) currently operates 10 vessels that serve the Sakhalin-2 project, including three oil tankers, two liquefied natural gas (LNG) carriers and five icebreaking supply and standby vessels. Its latest addition to this specialized fleet, a newly built multifunctional icebreaking standby vessel (IBSBV), was formally named Fedor Ushakov at a ceremony on October 11. The vessel is the third in a series of four IBSBVs purpose-designed for operating in the… 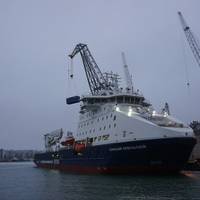 PAO Sovcomflot, Asea Brown Boveri Ltd. (ABB) Company and the Admiral Nevelskoy Maritime State University (MSU) have signed an agreement for research, technological and educational partnership. The document provides for the establishment of the Marine Propulsion Simulation Centre at MSU in Vladivostok. The operations of this centre which will be focused on preparing staff for work on vessels equipped with Azipod propulsion units. The agreement was signed by Sergey Frank, President and CEO of Sovcomflot, Sergey Ogay, Rector of MSU, and Anatoly Popov, Managing Director of ABB in Russia.

This Day In Naval History: June 13 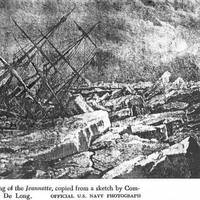 1881 - The bark-rigged wooden steamship Jeannette sinks after she is crushed in an Arctic ice pack during the expedition to reach the North Pole through the Bering Strait. Only 13 of her crew survive out of 33. 1900 - During the Boxer Rebellion, the International Relief Expedition turns back near Anting, China, and moves to Sanstun after the Tientsin-Peking railroad is cut by the Boxers, whose anti-foreign mantra grew to burning homes and killing foreigners as well as Chinese Christians. In total, 56 Marines and Sailors receive the Medal of Honor for their actions during the Rebellion.

This Day In Naval History: June 7

1898 - During the Spanish-American War, USS Marblehead (C 11), along with auxiliary cruisers USS Yankee and USS St. Louis, engage the Spanish gunboat Sandoval and the shore batteries at Guantanamo, Cuba for 2 1/2 hours. 1917 - During World War I, U.S. submarine chasers arrive at Corfu, Greece, for anti-submarine patrols. 1942 - Just after dawn, USS Yorktown (CV 5) sinks after being torpedoed the previous day by Japanese submarine (I 168). 1944 - The construction of artificial harbors and sheltered anchorages, also known as Mulberries, begins off the Normandy coast. 1944 - USS Susan B. Anthony (AP 72) strikes a German mine while approaching "Omaha" Beach to land reinforcements. After an unsuccessful effort to contain flooding, she is abandoned and, within a few hours, sinks.

This Day In Naval History: May 31 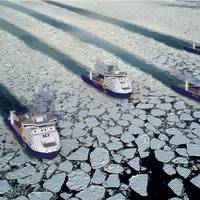 Construction on the hull of an icebreaking multipurpose supply vessel for Sovcomflot began today at the Arctech Helsinki shipyard with a keel laying ceremony. The vessel is the first in a series of four icebreaking sister ships ordered by Sovcomflot, Russia’s largest shipping company. The vessel’s first block, which weighs 221 tons, was placed in the building dock, signaling the starting point of the hull assembly. The vessel, which will measure 100 meters in length and 21 meters in breadth…

The United States has added a Russian oil and gas field, the Yuzhno-Kirinskoye Field, to its list of energy sector sanctions prompted by Moscow's actions in Ukraine, drawing a prompt rebuke from the Kremlin on Friday. The federal government said on Thursday the field, located in the Sea of Okhotsk of the Siberian coast and owned by Russia's leading gas producer Gazprom, contains substantial reserves of oil in addition to reserves of gas. "The Yuzhno-Kirinskoye Field is being added to the Entity List because it is reported to contain substantial reserves of oil," according to a rule notice in the Federal Register. A Kremlin spokesman criticized the move. "Unfortunately, (this decision) further damages our bilateral relations," spokesman Dmitry Peskov told reporters.

Gazprom Building up Resource Base

Greed and corruption were to blame for the sinking of a Russian trawler last week in which at least 56 crew died, a spokesman for investigators said on Wednesday. The Dalniy Vostok fishing vessel sank in the icy Sea of Okhotsk off Russia's far eastern coast last Thursday. Sixty-three people were rescued out of a crew of 132 people, with 13 missing presumed dead. Many past Russian disasters have been blamed on negligence or violation of safety regulations. "There are no doubts that this is a crime at the base of which lies the greed of the businessmen who owned the vessel and corrupt officials," Vladimir Markin, the Investigative Committee spokesman, told Rossiya 1 television, TASS news agency reported.

The Russian Defense Ministry has rejected the media reports that the Russian trawler tragedy in the Sea of Okhotsk that claimed 56 lives was due to a collision with a submarine, informs the state news agency TASS. Russian media quoted the spokesman for the Russian Navy, Gen. "All the information spread by some mass media and social networks that the cause of the shipwreck in the Sea of Okhotsk of a big autonomy trawler Dalniy Vostok could have been a collision with a Russian submarine is false," Konashenkov said.

Trawler with 132 crew sinks in freezing waters; rescue operation seeks missing crew. MOSCOW, April 2 (Reuters) - A Russian trawler sank in icy seas off Russia's far eastern Kamchatka peninsula on Thursday, killing at least 56 of the 132 crew, the emergencies ministry said on Thursday. Sixty-three people were rescued but 13 were still unaccounted for, hours after the Dalniy Vostok fishing vessel sank in the Sea of Okhotsk so quickly that its captain, who drowned, did not manage to send a distress signal. It was not immediately clear why the 26-year-old ship had sunk but a local official said the crew may have violated safety rules by overloading it, affecting its balance. Russia has a long history of road, air and sea disasters, many caused by negligence or violation of safety regulations.