Innovation, superior technology and competitiveness are the characteristics that have brought the Finnish maritime industry world repute. Its well-knit maritime cluster responsible for achieving a high level of production has propelled it into prominence in the global market. Extreme conditions during winter have set technological and quality demands on Finnish shipping which, in turn has contributed towards the emergence of a competitive maritime industry in Finland. The Finnish Maritime and Offshore Cluster (incl. 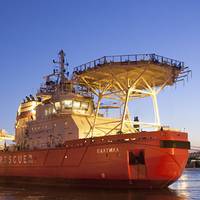 Arctech Helsinki Shipyard is now 100 percent Russian-owned as United Shipbuilding Corporation bought the remaining half of the company’s shares from STX Finland Oy. Arctech Helsinki Shipyard Inc. was founded in December 2010 as United Shipbuilding Corporation bought the first 50 percent of the shipyard shares from STX Finland, a subsidiary of the Korean-owned STX Europe. The joint venture was established to respond to the need of growing market of Arctic shipbuilding and to unite the Finnish and Russian maritime clusters. 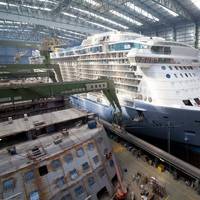 German cruise ship builder strengthens its yards. MEYER WERFT joins forces with the STX Finland shipyard in Turku. Following weeks of negotiations the Finnish Government and MEYER WERFT signed a share purchase agreement with the current owner STX Europe. With its 70% stake MEYER WERFT takes the industrial leadership of the new company. At present some 1,300 employees and a specialized supplier network are involved in the construction of the cruise ship Mein Schiff 4 for the German cruise operator TUI Cruises from Hamburg. 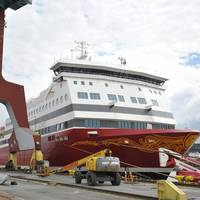 On June 4, 2013, STX Finland and the Norwegian passenger ship company Fjord Line AS signed a contract on conversion of Fjord Line’s cruise ferry. The steel production for the conversion project began January 10, 2013. In connection with the rebuild of MS Bergensfjord, the ship was renamed MS Oslofjord. The overall value of the conversion contract was approximately EUR 30 million, and it provided some 200 man-years of labor. MS Oslofjord is 134 meters long and 24 meters wide, built in Norway in 1993. 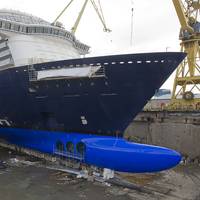 On Thursday 22 May 2014, STX Finland Oy’s Turku Shipyard handed over the first newbuild to TUI Cruises. Mein Schiff 3 is a sophisticated and highly innovative cruise ship, designed for the German premium-class cruise market. With the production started in November 2012, the environmentally friendly Mein Schiff 3 was floated out in November 2013. The ship provided some 5,500 man-years of labour to the shipyard and the network. Mein Schiff 3 will start operating on 13 June 2014, with the maiden voyage starting from Hamburg and heading for Palma de Mallorca.

On Friday May 9, 2014, STX Finland Oy’s Rauma Shipyard handed over a next-generation offshore patrol vessel to the Finnish Border Guard. The vessel was christened Turva by her godmother, Minister of the Interior Päivi Räsänen, in the christening and float-out ceremony held on August 2, 2013. The technically advanced and highly versatile 96 meters long and 17 meters wide offshore patrol vessel will be used for frontier supervision, maritime search and rescue (SAR), environmental protection and monitoring of natural resources… 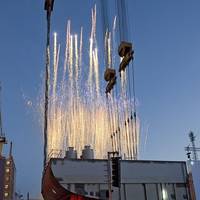 A Finland government owned investment company, Finnish Industry Investment Ltd, has today purchased a 66.4 per cent majority stake of the shares of Aker Arctic Technology Oy (Aker Arctic) from STX Finland Oy. Aker explain that In recent months the Ministry of Employment and the Economy has been studying actively the possibilities for securing the Company's know-how and further development in Finland. The transfer of the Company´s know-how, such as intellectual property rights, away from Finland, would have meant a serious setback for the entire Finnish Arctic marine industry's future development. Aker Arctic is one of the world's leading companies in Arctic marine logistics and offshore solutions as well Arctic vessels design. 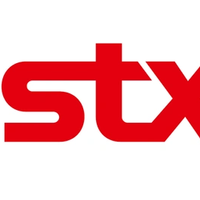 The float-out of Mein Schiff 3, an environmentally friendly cruise ship being built for TUI Cruises, was performed at STX Turku Shipyard on Friday, November 8, 2013. At the press conference held at STX Finland Oy’s Turku Shipyard earlier the same day, Richard J. Vogel, CEO of TUI Cruises and Jari Anttila, Deputy CEO of STX Finland Oy were pleased to speak about the important milestone Mein Schiff 3 project reached on that particular day. One year ago, the start of production of newbuilding 1383 was celebrated at Turku Shipyard. Mein Schiff 3 is scheduled for delivery in spring 2014.

Negotiation to Save Finnish Shipyard Completed 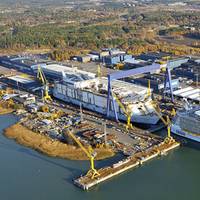 STX Finland has been actively seeking solutions for saving the Finnish shipyard industry. In September 2013, the company launched a major restructuring aimed at safeguarding the operating potential of the company and, by extension, the entire maritime industry in Finland, thus ending the years of uncertainty. As part of the STX Finland Oy restructuring, cooperation negotiations concerning the Rauma and Turku Shipyards have been conducted between the personnel groups and the company management. The negotiations were completed on October 29, 2013. 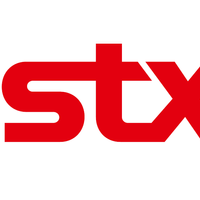 The offshore patrol vessel UVL10, currently being built for the Finnish Border Guard at STX Finland Oy’s Rauma shipyard, was named Turva at a festive naming and launching ceremony on Friday 2 August. Minister of the Interior Päivi Räsänen acted as godmother for the ship, wishing the vessel and its crew luck and success in their future maritime operations. In her speech as the ship’s godmother, Minister Räsänen stated that taking delivery of the ship is an important part of the preparation for the risks of increasing maritime transport and prevention of environmental damage…

Scandlines and STX Finland Oy have today signed a Letter of Intent (LOI) for building two new ferries for the route Rostock (Germany) – Gedser (Denmark) for delivery in spring 2015. The project will bring some 1000 man-years of work for STX Finland and its subcontracting network. The ferries will be double ended and construction will allow the ferries to be used on the route Puttgarden (Germany) - Rødby (Denmark) as well. Each ferry will have a capacity of 1,300 passengers and 72 trucks or 382 cars. The ferries will be operating on environmentally friendly LNG instead of traditional heavy fuel, thus reducing emissions to the air significantly. Nitrogen emissions, CO2 and particulates are reduced remarkably and sulphur emissions are practically zero. 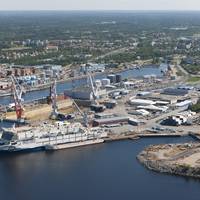 The keel of the offshore patrol vessel being built for the Finnish Border Guard was laid at STX Finland Oy’s Rauma Shipyard. The event was witnessed by representatives of STX Finland, Finnish Border Guard, classification society and media. Scheduled for delivery in November 2013, the 96 meter long and 17 meter wide vessel uses some of the latest technologies and environmentally friendly innovations in accordance with the Government decision-in-principle on sustainable public procurement. The vessel is equipped with machinery using liquefied natural gas (LNG) and diesel as fuel. 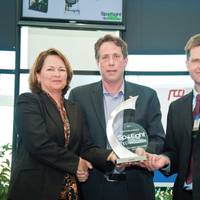 Rapp Hydema has been supplying deck machinery to research vessels since 1977, but this global market recently became especially significant for the group. In 2002, in what would be a watershed project, Rapp Hydema was chosen to outfit the NOAA Fishery Survey Vessel (FSV) Oscar Dyson class of vessels. The first four ships in the class were being constructed at VT Halter Marine Shipyard. “That NOAA research vessel contract provided us with excellent exposure,” said Johann Sigurjonsson, President of Rapp Hydema U.S.

On Thursday 10 January 2013, STX Finland Oy’s Turku shipyard delivered a next-generation cruise ferry to Viking Line ABP. Building of the environmentally friendly M/S Viking Grace started at the STX Turku shipyard in September 2011 and the ship was floated out in August 2012. The ship provided some 2,600 man-years of labour to the shipyard. M/S Viking Grace will enter traffic on the Turku (Finland) – Åland Islands – Stockholm (Sweden) route on 15 January 2013. M/S Viking Grace is the most environmentally friendly large cruise vessel ever built, using Liquefied Natural Gas (LNG) as fuel. The ship’s emissions into the sea have been eliminated, and emissions into the air are remarkably lower than those of any other large passenger ships. 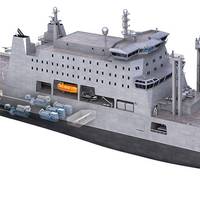 Many commercial marine products evolve from military roots. At Euronaval last month in Paris, contractors large and small from around the globe showcased new and emerging technologies. According to General Electric, there is a new era dawning for naval engineering and propulsion. “I’ve seen the future of naval propulsion, and it’s electrifying,” said GE Power Conversion’s Captain Mark Dannatt Royal Navy (retd.), speaking at Euronaval. Capt. Dannatt’s comments came as he outlined the latest advances in advanced naval electrical technology from a GE perspective. 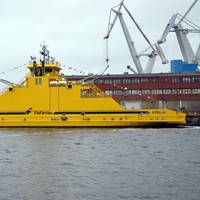 STX Finland announced a number of management changes, citing the challenging market situation. The primary target set for STX Finland is profitable operation. In 2011 this target was achieved, and now the focus is strongly on how similar development could also be secured over the years to come. By consolidating sales and marketing into a corporate level activity, STX Finland strengthen and increase the efficiency of its strategic targets which main focuses are diversification, differentiation and customer relationship management. - Timo Suistio has been appointed EVP, CMO of STX Finland. He is tasked with enhancing the functioning capacity of sales and marketing and boosting the order book of the shipyards to ensure long-term operation of the company.

STX Turku Shipyard launches multipurpose deck cargo vessel     STX Finland Oy Turku shipyard has launched a multipurpose deck cargo vessel built for Gaiamare Ltd. due delivery later in the year. With a LOA of 105.4 m and a breadth of 18.8 m the yet un-named vessel is described as being designed for multi-purpose uses, including wind-farm structures, as well as having the capability to act as an oil-spill response vessel. Strengthened to Ice Class 1A for Baltic Sea operation, the vessel will be capable of running on bio-fuels.

STX to Carry Out Conversion on Multipurpose Cargo Vessel

STX Finland Oy and Gaiamare Ltd. have signed a conversion contract on extensive modification work on the multipurpose deck cargo vessel Aura I. Modification work will be executed at STX Finland Rauma Shipyard from late June to August, 2012. “The signed conversion contract clearly indicates that our customer has confidence in STX Finland being capable of delivering both demanding new building and conversion on customer’s existing fleet vessels at the same time,” said Juha Mäkinen, vice president of sales and marketing, STX Finland Lifecycle Services.

On March 1, 2012, STX Finland Oy Turku shipyard carried out the launch of the multipurpose deck cargo vessel built for Gaiamare Ltd. The vessel will be approximately 105.4 meters long and approx. 18.8 meters wide. The vessel is scheduled to be delivered in late spring 2012. The launching was carried out near the shipyard’s construction basin following traditions of the yard with representatives from Gaiamare Ltd, the classification society Bureau Veritas and STX Finland; invited guests and press also participated. The multipurpose deck cargo vessel is designed to operate globally and can be utilized for various tasks, including transport of demanding project cargo, such as offshore wind farm structure and for energy wood transport in the Baltic Sea area.

On December 21, 2011, STX Finland Oy and the Finnish Border Guard signed an agreement on construction of a next generation offshore patrol vessel. The vessel will be built at the STX Rauma ship­yard and delivered to the customer in November 2013. The highly advanced vessel will be 96 metres long and 17 metres wide and will be capable of serving a large variety of functions. Construc­tion of the vessel will bring over 400 man-years of labour to STX Rauma shipyard person­nel and its supplier network. The domestic content of the project is estimated to be 90%. The main duty of the offshore patrol vessel is to operate in open sea patrol.