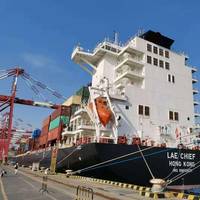 Swire Shipping deployed its first 2,750TEU newbuild, MV Lae Chief, on its upgraded North Asia Express (NAX) service. Launching the new fixed-day fortnightly service with her maiden voyage, the vessel made her first port call in Shanghai on November 5, 2020.The new 2,750-TEU vessel is fitted with three 45mt cranes capable of dual lifts enabling it to carry all cargo types, including breakbulk, out of gauge and reefers. With strengthened tank tops to 20 t/m², MV Lae Chief is capable of carrying breakbulk such as steel and forest products… 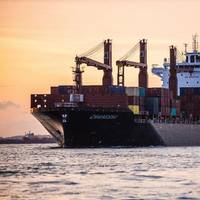 Swire Shipping, trading division of China Navigation Company, announced it will be entering a new vessel sharing partnership from New Zealand to Tonga, Samoa (Apia), Cook Islands and Fiji. This market leading service will depart every 10 days from Auckland.“Swire Shipping has built up a strong reputation for itself as a market leader connecting the Pacific Islands to the world. Today’s launch will enable us to offer expanded global coverage into the Pacific Islands, as well as specifically providing New Zealand customers with a new direct service alternative. Our aim is to offer best in class and reliable services from all key trading countries and regions importing and exporting to the Pacific Islands…

The University of the South Pacific (USP) and The China Navigation Company (CNCo), parent of Swire Shipping and Swire Bulk, have signed a Memorandum of Understanding (MOU) to conduct feasibility studies for the design costs and plan for new generation ships for the Pacific region which is committed to low carbon sea transport.Under the MOU signed on 10 November 2018, Project Cerulean aims to eventually develop a new class of small cargo freighter, which, once proven to be commercially viable to operate, can be scaled up in numbers to provide a cost-effective solution for currently marginalised communities in the Pacific Island Communities and Territories (PICT).In the immediate term…

Swire Group’s shipping arm China Navigation Company establishes presence in Shanghai where it was founded 147 years ago!The China Navigation Company (CNCo) opened its China headquarters officially in Shanghai on 05 November 2018, marking a significant return to its birthplace 147 years ago, and a significant milestone in its history, said a press release from the company.CNCo started operations on the Yangtze River in 1872, operating a modest fleet of Mississippi-style paddle steamers.CNCo is a major global player in the shipping scene today, with operations spanning Australia, China, PNG, Fiji, India, New Zealand and the US. Headquartered in Singapore…

China Navigation Company (CNCo), part of the Swire Group, has expanded its presence in North America by establishing a branch office in Vancouver, Canada.The opening ceremony was graced by Bruce Ralston, Minister of Jobs, Trade & Technology, British Columbia, who unveiled a plaque in the CNCo office located at W Hastings Street.Minister Bruce Ralston said, “The Province recognises the significant contribution that The China Navigation Company makes to the shipping industry worldwide. We look forward to this new regional North American office in Vancouver contributing to increased trade between B.C. and the Asia Pacific. A strong shipping industry will create good jobs for people and increase opportunities for B.C.

Following the naming of its new cement carrier, MV Aotearoa Chief, in New Zealand yesterday, The China Navigation Company (CNCo) christened its last newbuild, MV Tunsin, on 16 November at the Imabari Shipyard in Japan. Tunsin is the 241st CNCo newbuilding and the 86th vessel in this series. CNCo ordered four handysize bulk carriers (Imbari38 loggers) from Imabari Shipbuilding in 2014. Deliveries of the first three vessels, MV Taiyuan, MV Tientsin and MV Tsingtao took place between July and October this year. The names chosen for the vessels reflect CNCo’s long history in the Asia Pacific region since its first ships sailed on the Yangtze River in 1872. MV Tunsin was named by lady sponsor, Sara Cutler, wife of Robert Cutler, Staff Director of John Swire & Sons Ltd.

The China Navigation Company (CNCo) christened its last newbuild bulk carriers, MV Tunsin, on 16 November at the Imabari Shipyard in Japan. Tunsin is the 241st CNCo newbuilding and the 86th vessel in this series. CNCo ordered four handysize bulk carriers (Imbari38 loggers) from Imabari Shipbuilding in 2014. Deliveries of the first three vessels, MV Taiyuan, MV Tientsin and MV Tsingtao took place between July and October this year. The names chosen for the vessels reflect CNCo’s long history in the Asia Pacific region since its first ships sailed on the Yangtze River in 1872. MV Tunsin was named by lady sponsor, Sara Cutler, wife of Robert Cutler, Staff Director of John Swire & Sons Ltd.

Connecting more than 12 ports, monthly multipurpose service with lifting capacity of up to 120 metric tons. Swire Shipping and Rickmers-Linie has announced the launch of a connecting carrier partnership. Under this partnership, Swire Shipping will be able to connect its breakbulk and project cargoes in India and the Middle East, through Rickmers-Linie’s Middle East and India Service, to its network in Australia, New Zealand and the South Pacific, via Singapore. The first voyage is scheduled to depart Mumbai already on 9 June 2015, the first voyage from Jebel Ali being on 28 June 2015. The load ports are Jebel Ali, Mumbai, Chennai, Dammam, Kolkata (other ports on inducement). 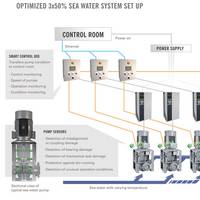 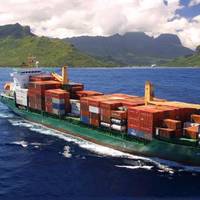 China Navigation Co (“CNCo”), the deep sea shipping arm of the Swire group, having held a minority shareholding of 13% in Polynesia Line Ltd (“PLL”) since 1979, has purchased all the remaining shares in the line. CNCo has been an active and committed shareholder in PLL for the last 34 years and is fully committed to ensuring that the Line continues to serve the needs of its strong and loyal customer base in the South Pacific. “We have tremendous confidence in PLL’s position as…

China Navigation Company's (CNCo) four new Chief Class 22,000dwt multi-purpose vessels ordered from Zhejiang Ouhua Shipbuilding Co. Ltd. (Ouhua), on Zhoushan Island in China, will each feature three 60-ton variable frequency drive (VFD) MacGregor cranes and hydraulically-operated MacGregor hatch covers. The order was booked in the second quarter 2013 order intake. The vessels are scheduled for delivery in late 2014 and first quarter 2015 and the contract includes options for an additional 2+2 vessels. CNCo is the deep-sea ship-owning and operating arm of the Swire group of companies and is wholly-owned by the group's parent company, John Swire & Sons.

The China Navigation Co Ltd (CNCo) has announced plans to consolidate the majority of its liner shipping services under a new entity, Swire Shipping Ltd, a new company recently incorporated in the United Kingdom. The service framework and existing network of management offices will not be affected by this change. Indotrans, Indotrans Pacific and New Guinea Pacific Line will be retired. gradually phased out during the course of 2007. structures, and will continue to trade under their current names. Indotrans and The Bank Line, and the introduction of several new trades. Southeast Asia and Papua New Guinea with the South Pacific Islands.