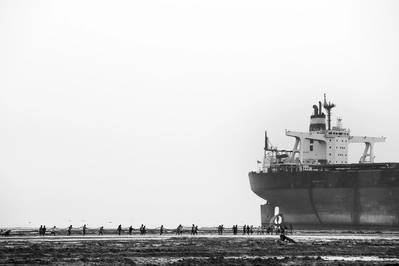 Following the sale of Capesize bulkers for recycling last week, the trend has continued this week as well, with further transactions reportedly taking place on units – including Capes and a Suezmax tanker, as the market finally shows signs of life after an absolutely inert summer, according to GMS.

All of the major ship recycling destinations are still poised rather precariously, and Pakistan has seen some further depreciations on the currency towards the end of this week, whilst the country continues to battle floods, shortage of essentials, and the increasing spread of water-borne diseases, as thousands have perished in the floodwaters. Bangladesh too remains somewhat tentative, with limits on higher dollar value L/Cs still in place, local steel plate prices that took a noteworthy dive this week, and a Taka that seems to have found its stable place this week.

India has experienced (marginally less) volatile moves on steel across the week and remains the safest destination to deliver at present. Following an incredibly quiet 3 - 4 months of inactivity, there are signs of demand gearing up across sub-continent locations as most plots lie nearly dormant. Lastly, the Turkish market faces its own dithers this week, with further declines on fundamentals that are burying sentiments even further into the rut.

Overall, chartering markets have deprived recycling destinations of most tonnage, but Dry Bulk has recently started to cool off (particularly the Capesize Bulker sector), whilst Containers are also showing signs of softening, all while Tanker rates continue to shoot onwards and upwards.

It should hopefully be a busier finish to the year, as Owners look to capitalize on these still firm levels, despite the $+100/LDT fall we have seen since the peaks of earlier this year. Rates in and around $550 – $600/LDT are still incredibly firm, given the lows we had witnessed of $250/LDT or so, during the early stages of the Covid pandemic.