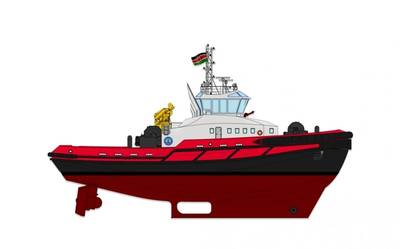 Turkish tugboat builder, towage and pilotage operator Med Marine said it has signed a deal with Kenya Ports Authority (KPA) to build and deliver a new 42-meter tugboat for the Port of Mombasa.

The vessel is scheduled to enter service in East Africa’s largest port in 2021 as part of the KPA’s equipment modernization and maintenance program aiming to enhance efficiency at the port.

The vessel design is from the RAstar ASD tug series by Canada’s Robert Allan Ltd. The new RAstar 4200 with a bollard pull of 120 metric tons, ranking it among the most powerful tugs Robert Allan Ltd. has ever designed, according to the company’s contracts manager, Oben Naki.

Muhammet Gökhan, business development manager from Med Marine, said, “Specially built and equipped to meet the operational needs of the Kenya Ports Authority, this will be one of the largest RAstar series tug designed by our long-time partner Robert Allan Ltd.”

The RAstar 4200 (MED-A42120) will join the KPA fleet to deliver ship-handling and coastal towing and will be available for salvage and harbor operations.

The KPA acting CEO and general manager of engineering services, Rashid Kassim Salim, said, “[The vessel] will be part of continual improvement of service delivery to the shipping industry, thus making Kenyan ports more attractive. The acquisition is integral to KPA’s business risk and continuity mitigation against blocked channel incidences.”

He added that salvage tug services will in essence be a commercial venture available worldwide as a new revenue stream of maritime chartering services upon commissioning by October 2021. The project is part of the authority’s strategic initiatives to exploit the blue economy. In this regard, the port manager said the salvage tug will enhance the Authority’s image as world-class ports of choice whereby they will provide all-round search and rescue (SAR) services along the eastern coast of Africa and beyond, further augmenting KPA’s compliance to ISPS Code requirements.

Damen Shipyards Group said it has laid the keel for a new crane barge that is going to be delivered in Panama, following…

SCHOTTEL to Equip New Tug for Port of Aarhus