UN Agencies to Deliver as One on Mixed Migration by Sea 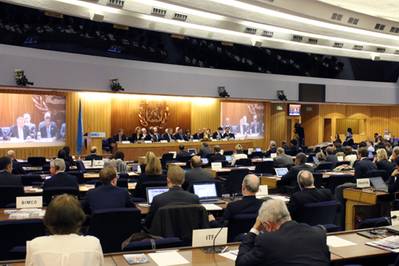 Several United Nations (UN) agencies have agreed to establish a mechanism to enhance existing inter-agency communication with respect to the maritime aspects of mixed migration by sea.
Agencies concerned about the loss of life, injury, trauma and serious human rights violations affecting migrants, asylum-seekers and refugees traveling by sea met in London last week (March 4-5) at the headquarters of the International Maritime Organization (IMO).
Building on the Joint Statement on Protection at Sea in the Twenty-First Century, that was agreed during the UN High Commissioner for Refugees’ Dialogue on Protection Challenges, held in Geneva on December 10, 2014, it was agreed to establish an interim, informal mechanism for enhancing inter-agency communication on the subject.
The intention is that the mechanism would facilitate operational-level communication between relevant agencies bilaterally and multilaterally and provide a conduit for better informing the Global Migration Group (GMG) on maritime issues.
Although precise details of the mechanism are yet to be finalized, it was envisaged that it might, for example, consider: the establishment of joint databases to share and collate information and statistics on irregular movements and suspect vessels; quantifying the effects of irregular and unsafe crossings on the shipping industry; improving maritime situational awareness; or any other maritime issues identified as being of relevance to the work of the GMG.
Speaking at the meeting, IMO Secretary-General Koji Sekimizu said, “The issue of mixed migration by sea, including irregular migration, has been a serious concern for decades – if not longer. But, in recent years, it has reached epidemic proportions, to the extent where the whole system for coping with such migrants is being stretched up to, and sometimes beyond, its breaking point,” and called for a collective effort to bring about a solution to the problem of thousands of lives being placed in danger at sea.
Estimates put the number of mixed movements by sea in Europe alone during 2014 at more than 218,000, with more than 3,500 deaths.
Agencies saw the meeting as an opportunity to develop a positive, concerted approach.
From the UN Office of Drugs and Crime, Executive Director Mr. Yuri Fedotov said, “The first two months of 2015 alone have already seen several incidents in various parts of the world. These tragedies represent a major global challenge, requiring the urgent attention of States and international organizations. In this regard, I would like to thank the International Maritime Organization for hosting our meeting today and bringing together concerned agencies to address this issue. We need to ensure close inter-agency cooperation between our agencies in line with our respective mandates, and in cooperation with the private sector and civil society.”
Craig Mokhiber, from the Office of the UN High Commissioner for Human Rights added, “There is a broad recognition that this is a multidimensional problem that requires multi-dimensional solutions. The beauty of having the entire international system come together and talk about these issues is that you have the expertise, the experience and the perspectives from across the spectrum.”
Dr. Volker Turk, Assistant High Commissioner in the Office of the United Nations for Refugees, said, “We are all trying to find what our role is and that has to be done in cooperation with each other. We look forward very much to collaborating further on this.”
Speaking for the IMO, Bernd Hemingway said, “Never before have we seen so many crisis situations and emergencies that displace people in huge numbers. There are immense ‘push’ factors which encourage people to move from one country to another. For us, contact with the other agencies, particularly on the maritime side, fills a gap that we are able to close now.”
From the UN Development Program, Neil Buhne spoke of his organization’s efforts to foster and strengthen local and national capacities, thereby alleviating some of the ‘push factors’ prompting large-scale migration. But, he added, “No one organization or country can have all the answers.”
Gilbert Houngbo of the International Labor Organization (ILO) stressed the importance of decent work as a factor in reducing the need for migration and added, “I believe that together, equipped with our distinct yet complementary mandates and tools, we can help affected stakeholders face this increasingly growing challenge. I wish to thank again the IMO Secretary-General for providing us with the opportunity to move forward on a constructive and collaborative approach to addressing unsafe mixed migration by sea.”
At the close of the meeting, IMO Secretary-General Sekimizu reiterated the importance of a collective approach to the issue. “IMO stands ready to collaborate and give its support to all those who can play an active part in addressing this dreadful situation,” he said. “We need to work together to develop impact-oriented actions. As an international community, we need to deliver as one.”
Senior representatives from the following agencies participated in the meeting: International Labor Organization (ILO), International Maritime Organization (IMO), the United Nations High Commissioner for Refugees (UNHCR), the United Nations Office on Drugs and Crime (UNODC) and the Office of the United Nations High Commissioner for Human Rights (OHCHR), United Nations Development Program (UNDP), the United Nations Division of Ocean Affairs and the Law of the Sea and the International Organization for Migration (IOM).