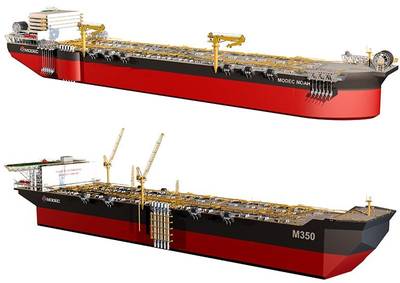 As a result of increases in required crude oil and gas production capacities, FPSO topsides have become bigger and heavier, which has led to insufficient deck space area and insufficient crude oil storage capacity on on converted very large crude carriers (VLCC), MODEC said. Additionally, MODEC said it sees durations of client contracts are increasing, thereby requiring longer FPSO design lives, and it expects that there will be a heightened demand for newbuild FPSO hulls.

In response to these market demands, MODEC joined forces with Mitsui to develop a next generation new built hull for FPSOs called the MODEC NOAH, based on a next generation hull design for FPSOs (called the noah-FPSO Hull, with "NOAH" standing for New Offshore Adapted Hull) that had already been developed by Mitsui E&S Shipbuilding. However, the MODEC NOAH is MODEC's own new hull design for FPSOs, and it was developed with the aim of achieving MODEC's top priority of maximizing the lifecycle value that each FPSO can provide to clients and other stakeholders through their whole lifetime, more than 20 years from the start until the end of operations. Furthermore, the MODEC NOAH has been developed to overcome challenges that have constituted technical limitations in oil tanker conversion FPSOs, the company said.

According to MODEC, key features of the MODEC NOAH are:

MODEC received Approval in Principle (AiP) for the design of MODEC NOA" from the American Bureau of Shipping (ABS) in March 2019, as well as from the Bureau Veritas (BV) and the DNV GL in May 2019.