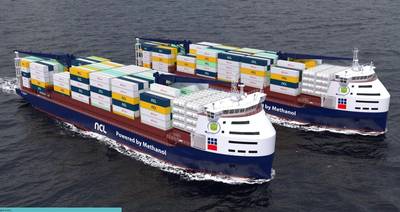 The vessels come with a dual fuel engine setup which enables operation on methanol as well as conventional MGO.

The company said the order woul allow it to "take a significant leap forward in its commitment to use carbon-neutral solutions in regional container trades together with strong partners."

The vessels come with 15-year time charters to North Sea Container Line AS (NCL), backed by CoAs from various parties, including a 15-year CoA with Norwegian industrial group Elkem ASA.

The contract price of USD 39m per vessel is covered by the contracted cash flows from the 15-year time charter with NCL at an initial rate of EUR ~16,300/day, before inflationary adjustment mechanisms, the company said.

"The transaction will provide earnings visibility into 2040 supporting MPCC’s distribution policy, with no negative impact on expected distributions in 2022/2023," the company isad.

The project has been awarded NOK 13.7 million by Enova, owned by the Norwegian Ministry of Climate and Environment, and NOK 60 million from the NOx fund, the Norwegian business sector’s fund to reduce emissions.

The vessel owning entities will be majority owned by MPCC (90.1%) together with Topeka MPC Maritime AS (9.9%), a joint venture between Topeka Holding AS (zero emission shipping company owned by Wilhelmsen Group) and MPC Capital AG.