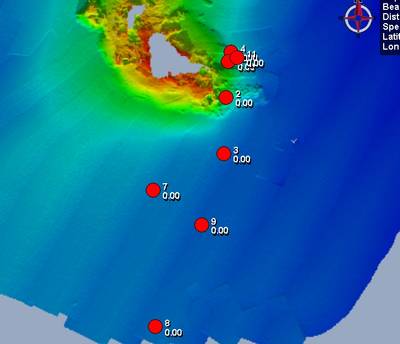 Imagery of the seafloor generated by a WASSP multibeam sonar around the Astrolabe Reef, the location of the Rena grounding in New Zealand.

A WASSP Multibeam Sonar is being used by hydrographic surveyors at the grounding of the 236m-cargo vessel MV Rena on the Astrolabe Reef off the coast of New Zealand, to locate lost containers.

Marine electronics manufacturer WASSP Ltd, a world leader in multibeam sonar technology has provided one of their WASSP sonar systems for the salvage effort.  Within 48 hours of the WASSP arriving in Tauranga, it had been used to identify 12 targets, 7 of which were submerged containers – some at depths of up to 80m.Single beam echo sounders and side scan sonar had been used to support the salvage operation; however MBES systems provide a more economic means of gathering seabed information, particularly in deeper waters.

With a WASSP 160kHz multibeam sonar, Hydrographic Surveyors are able to generate detailed seafloor profiles from 2-200m in depth and can accurately locate seafloor structure, shipwrecks and foreign objects in the water clumn. The surveyors involved in the salvage effort have been surprised as to how quickly they were able to get the equipment fitted and the system up and running.  The Navigator and WASSP Sonar acquisition software was also easy to set up and operate.  Most other multibeam systems require significantly longer mobilisation timeframes.

WASSP Ltd General Manager Ian McDonald says WASSP Multibeam Sonars are designed and manufactured at their headquarters in Auckland, New Zealand and have been exported globally since 2006 and have sold more than 450 units. "The WASSP Multibeam technology offers many advantages, mapping the seafloor with greater accuracy. For example, in 100 metres of water, the swath will cover a strip of sea floor 346 metres wide from port to starboard – 173 metres either side of the vessel,” said McDonald.

“In relation to the Rena salvage, WASSP provides a means of covering a lot of seabed very quickly, which is crucial in a salvage operation.” WASSP’s Windows-based software is easy to use and will run automatically without requiring continuous operator input and all the functions are controlled by a computer mouse. WASSP data can be exported to a third-party chart-plotting system and raw multi-beam sonar data can be saved for further analysis. “WASSP is an extremely useful and cost-effective system, which captures critical information about the water column, seafloor and marine environment. It’s the essential Multibeam Sonar for marine professionals.”

Caption:
Imagery of the seafloor generated by a WASSP multibeam sonar around the Astrolabe Reef, the location of the Rena grounding in New Zealand.

Modern space technology and artificial intelligence have combined to enhance the conservation of marine animals: the new service…