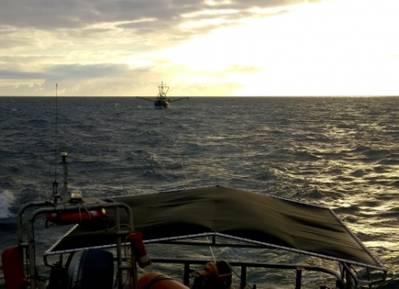 The U.S. Coast Guard rescued a stranded fishing vessel 32 miles east of Nantucket, Massachusetts, Wednesday.
Watchstanders at Sector Southeast New England in Woods Hole, Massachusetts received a distress call via channel 16 VHF from the five-person crew aboard the 75-foot scallop vessel Hunter, that they were adrift without power after their main engine failed.
The Coast Guard attempted to reach nearby mariners to assist the Hunter, but none were able. The crew of the Coast Guard Cutter Tybee, a 110-foot patrol boat from Woods Hole launched, arrived on scene, and took the Hunter in tow toward Nantucket Sound.
Once in Nantucket Sound, at 8:45 a.m. Thursday, they transferred the Hunter to a commercial tow boat who took them safely to shore.
"We ensured the crew was safe throughout the night - we knew they had food, water and a generator on board," said Petty Officer 1st Class Stuart Broadway, a watchstander at the Sector Southeast Command Center. "Still, our responders worked all night to get out to the Hunter crew, and tow them in."