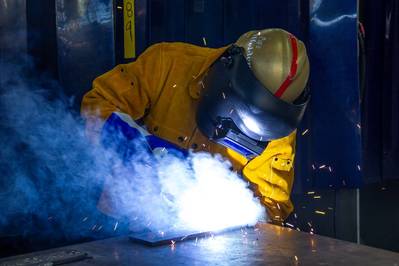 Shipbuilder General Dynamics NASSCO on Thursday laid the keel for the future USNS Harvey Milk (T-AO 206), the second of six vessels in the John Lewis-class fleet replenishment oiler program for the U.S. Navy.

At 746-feet in length and displacing 49,000 tons, the future USNS Harvey Milk will provide logistics support to carrier strike groups around the world. Fleet oilers serve as a supply lifeline for Navy vessels carrying out missions in the Western Pacific, Indian Ocean and beyond. Crafted for underway replenishment, the oilers transfer fuel, food, spare parts and items needed to sustain military operations at sea as part of the Navy’s combat logistics force.

Senator Dianne Feinstein, D-Calif., and Paula Neira, former naval officer and USNA class of 1985, the ship’s sponsors, virtually laid the keel by having their initials welded onto a steel plate by NASSCO welders. The steel plate will be permanently affixed to the ship's keel and will remain with the vessel throughout its time in service.

Due to current COVID-19 restrictions, NASSCO will release a virtual keel laying video via their company website and Facebook page on Thursday, September 10. The short video will include remarks from the ship sponsors and the Navy.

Former Secretary of the Navy, Ray Mabus, declared the John Lewis-class of oilers be named after leaders who fought for civil and human rights. The second of six ships honors Harvey Milk, human and civil rights activist who dedicated his life advocating for equality.

“I worked with Harvey, I know his dedication to human, civil and gay rights, and he was an exceptional figure,” said Senator Feinstein. “I think it really is fitting and proper that this great ship be named after him.”

The Navy began procuring John Lewis (TAO-205) class oilers in 2016, and so far a total of six have been procured.

The Navy wants to procure a total of 20 TAO-205s. The Navy’s FY2021 budget submission estimates that TAO-205s cost about $530 million each when they are procured at a rate of two per year.