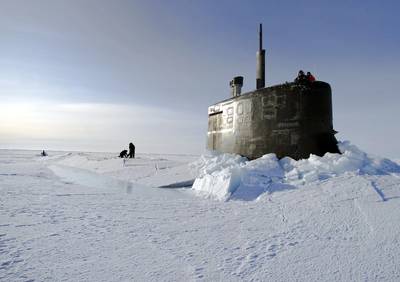 The U.S. Navy may follow up October’s carrier strike group operations in the Arctic with another foray into the icy High North, with leadership considering sending a group of ships into a trans-Arctic shipping lane this summer, the Navy secretary said.

Much has been made of potential Arctic shipping lanes opening up as ice melts and more areas become navigable, said a press release from USNI NEWS.

An expected uptick in commercial shipping and tourism in the Arctic region has put some urgency on the U.S. Coast Guard’s plans to build a fleet of icebreakers, as well as the Navy’s interest in having a more visible presence in the region.

Navy Secretary Richard V. Spencer said at a Center for a New American Security event that the Navy has been in the Arctic regularly since the 1960s, but most of that presence has been with submarines or patrol aircraft rather than with warships on the sea.

With three potential trans-Arctic routes potentially opening up, he said, the Navy’s discussion about Arctic presence has changed dramatically in the past two years.

“As an example, this summer, the [chief of naval operations] and I have talked about having some ships make the transit in the Arctic. It’s going to be a multi-service task – I think you’ll see the Coast Guard involved. We’re just fleshing it out right now. But what is the purpose of that? We have to learn what it’s like to operate in that environment,” he said.

When the Harry S. Truman Carrier Strike Group operated north of the Arctic Circle for several weeks this fall, the carrier itself handled the environment well, but its smaller escort ships and the supply ships the carrier relied on had a tougher time in the high sea states and icy waters. Similarly, when the Iwo Jima Amphibious Ready Group sailed from Iceland to Norway in October, the larger amphibious assault ship made the journey safely, but the smaller dock landing ship was damaged in heavy seas and had to turn back.