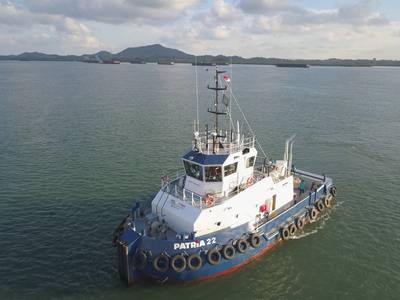 The first in a series of at least three OSD-IMT7402 shallow draft tugs has been delivered to PT Patria Maritime Lines based in Cikarang, Indonesia. It was built at PT Patria Maritim Perkasa (subsidiary of PT United Tractors Pandu Engineering) shipyard in Batam, and is now on its way to Banjarmasin, South Kalimantan.

The 20 tonnes bollard pull, shallow draft, conventional tug is equipped to assist 300 foot barges berthing and unberthing and for towing these barges along the Barito river in the South Kalimantan area of Indonesia. During the dry season, the upstream part of the river has a water depth of only around 2.5 to 3 meters. For this reason, the design draft is being kept at two meters.

The 23-meter LOA OSD-IMT7402 tug is fitted with a towing hook aft. A push bow with a triple vertical D-fender is integrated in the ships’ structures. The design offers accommodation for ten persons arranged in two quadruple and two single cabins.

The tug is equipped with two 829BHP main diesel engines connected to drive shafts and conventional fixed propellers with high efficiency nozzles. This configuration allows for an ahead bollard pull of 20 tonnes and a free running speed of around 12 knots. It is Indonesian flagged and classed by Bureau Veritas.