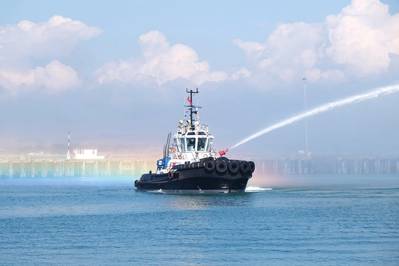 On September 18, Portland Port held the official naming ceremony of the newest tug to enter the fleet, the Rupert Best.

It was announced earlier this year that the new tug would be arriving at Portland Port following its construction in 2019. The tug was built in Turkey to a Robert Allen design, the Sanmar Sirapinar class ‘RAmparts 2200’ azimuth stern drive tug will improve and help support the port’s ability to welcome larger vessels.

The multimillion-dollar tug entered service earlier this year shortly after the passing of Commander Best. However, COVID-19 restrictions forced any naming ceremony to be postponed until it was safe to hold. The new asset joins Portland Port’s existing tugs, the Maiden Castle and Rufus Castle, all playing pivotal roles in enhancing the port’s towage capability.

The new vessel has been named after former submarine Commander and Portland Port director, Rupert Best, who passed away in February of this year. Commander Best commanded the nuclear- powered submarine HMS Courageous during the Falklands conflict in 1982. He retired from the Royal Navy during the 1990s and was part of the consortium that persuaded Langham Industries to privately take over Portland Port from the Ministry of Defence in 1996, subsequently forming Portland Harbour Authority. Rupert was a strong advocate for both the port and Dorset as a whole and worked tirelessly to help the port grow to what it has become today.