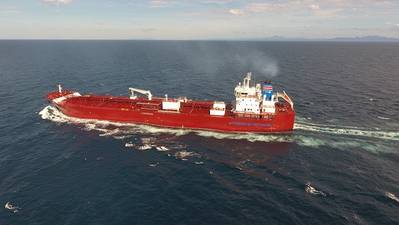 NYK Bulkship (Asia) Pte. Ltd., an NYK Group company based in Singapore, signed a long-term time charter contract with Waterfront Shipping Company Limited (WFS) for two newly built chemical carriers, each equipped with a dual-fuel engine that enables the vessels to be powered not only by marine fuel oil but also methanol.

Planned for delivery from the Hyundai Mipo Dockyard (Korea) in 2022, the vessels will be delivered to WFS, a wholly owned subsidiary of Methanex Corporation, the world’s largest producer and supplier of methanol. Both vessels will be managed by the NYK Group company NYK Shipmanagement Pte. Ltd (NYKSM).

The dual-fuel engine for the new ships will be an eco-friendly engine that reduces sulphur oxides (SOx) by approximately 99 percent, in addition to reductions to particulate matter (PM) and nitrogen oxides (NOx). This environmental specification enables the vessels to meet environmental regulations of international shipping, such as SOx Global Cap regulations set by the IMO.