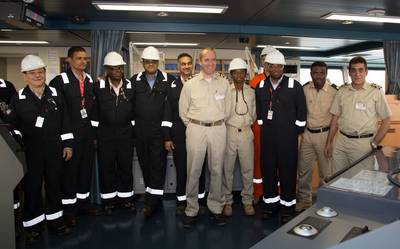 The first cargo was sold to Angola's state oil & gas company and is currently being shipped to Brazil by the  LNG carrier 'SS Sonangol Sambizanga', one of seven 160,000 m3 LNG vessels that are under long-term charter to the Angola LNG project.

Angola LNG, the Soyo-based facility built to create value from Angola's offshore gas resources, confirms that production of liquefied natural gas (LNG) has safely commenced at the Angola LNG plant in Soyo and that its first cargo has been shipped, marking the first new LNG supply to come on-stream since 2010.

Commenting on the first cargo Artur Pereira, CEO, Angola LNG Marketing said: "Angola LNG is entering the market at an exciting time.  The world LNG market is expected to remain tight over the coming years, with very limited new LNG capacity coming on-stream.  We are delighted to be producing and shipping our first LNG cargo."

A large number of master LNG sale and purchase agreements have been executed with energy companies across the world, providing Angola LNG with a robust and diverse portfolio of customers.  Further agreements are currently being negotiated.

"Angola LNG's vision is to be a reliable and competitive supplier, a strong community partner, and a role model for the economic development of Angola." added António Órfão, Chairman, Angola LNG Ltd.  "The project provides a solution to minimise flaring and environmental pollution by gathering associated gas from Angola's offshore oil fields to provide clean and reliable energy to our customers and a return on investment for our shareholders."

Angola LNG is a partnership between Sonangol, Chevron, BP, ENI and Total that will gather and process gas to produce and deliver LNG and NGLs.  The project has an expected life of at least 30 years.