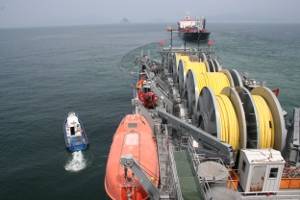 In 2009, the Military Sealift Command offshore petroleum distribution system ship MV Vice Adm. K.R. Wheeler (foreground) and Military Sealift Command tanker USNS Lawrence H. Gianella (background) practice running a float hose between the two ships during a one-day exercise off the coast of Yeosu, South Korea. (U.S. Navy photo by Edward Baxter, taken off Yeosu, South Korea on Aug. 18, 2009)
Military Sealift Command offshore petroleum distribution system ship MV Vice Adm. K.R. Wheeler participated in a combined, joint military exercise off the coast of Anmyeon, Republic of Korea on March 23. Combined Logistics Over the Shore 2011 demonstrated the U.S. Navy’s ability to project power over the sea in coordination with host nation military forces.
Part of the annual Korea peninsula defense exercise Foal Eagle 2011, this year’s CJLOTS was the first conducted in partnership with the Republic of Korea and the first conducted off the peninsula’s west coast.
Commanded by a South Korean navy rear admiral, the one-day exercise included demonstrating portions of both the at-sea and ashore operations involved in pumping fuel from a tanker to shore, as well as the deployment of military cargo onto the beach aboard barges.
More than 200 U.S. sailors, soldiers, airmen and Marines worked side-by-side with 26 civilian mariners aboard Wheeler to simulate delivering fuel to military forces operating ashore from a tanker at sea – a vital capability for sustaining operations where port facilities are inadequate. While CJLOTS was conducted in a single day, exercise planners have been on the ground at Anmyeon for the past week making final preparations.
Wheeler, which is specially designed to serve as a pumping station capable of transferring fuel from a tanker at sea to shore through eight miles of flexible pipe stored on the ship’s weather deck, trained with a South Korean fuel tanker for the first time. Operating about 3.5 miles off the coast of Anmyeon, the 165-foot Fast Tempo, a powerful offshore supply vessel designed to support Wheeler in real-world operations, ran a tow line to the tankers’ stern, securing the ships together the same way they would be during a real-world scenario.
While neither the float hose connecting Wheeler to the tanker, nor the flexible pipe connecting Wheeler to shore were deployed, hooking up with the South Korean tanker provided valuable training for the ship’s civilian mariners working for a private company under contract to MSC.
“In real-world operations, we may work with a South Korean tanker, so this training validates that we are ready if tasked,” said Wheeler's civilian Master Capt. Jon Skoglund.
Ashore, U.S. soldiers practiced setting up equipment used to receive, distribute and store the fuel that Wheeler would pump to shore. The key piece of equipment is a receiving device called a Beach Terminal Unit that would hook up to Wheeler’s flexible pipe and relays the fuel pumped ashore to inflatable bladders used to store large quantities of fuel. No fuel was pumped during this exercise.
Five reserve sailors from Bronx, N.Y.-based Expeditionary Port Unit 102, one of MSC’s highly mobile units that set up port operations even under the most difficult situations, deployed to Anmyeon. “Our mission is to ensure that Wheeler had everything it needed to complete the mission,” said Navy Lt. Sean Strawbridge of EPU 102.
Marines and sailors from Task Force 76; U.S. Naval Forces, Korea; MSC Office Korea; and Expeditionary Strike Group Three also participated. Personnel from the Korea-based U.S. Eighth Army established a living support element and set up the Beach Terminal Unit, while U.S. Air Force members provided weather information services.
Simultaneously, 270 South Korean army and navy personnel deployed cargo to the beach from commercial barges and military landing craft. A crane lifted palletized cargo onto the beach, while wheeled and tracked vehicles, including armored personnel carriers, rolled down the barge’s ramp onto the beach.
Operations finished late March 23 and, with Wheeler’s role in the exercise complete, the ship sailed away from Korea’s coastline.