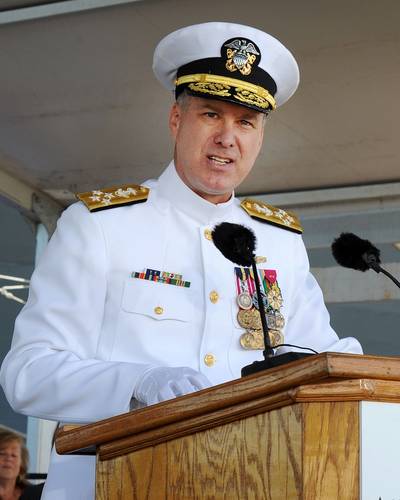 The vice chief of naval operations (VCNO) met with several key leaders within the government of Japan and its Ministry of Defense Aug. 26. Adm. Mark Ferguson is at the beginning of a series of engagements in Tokyo, at several U.S. Navy installations in Region Japan, and with neighboring local government officials this week.

During this first day of the trip, Ferguson met with the Japan Minister of Defense, Itsunori Onodera, and the Japan Maritime Self-Defense Force Vice Chief of Staff, Vice Adm. Eiichi Funada. During the discussions Ferguson stressed the importance of the U.S.-Japan alliance, the U.S. Navy's commitment to the defense of Japan, and plans to further U.S. Navy and Japan Maritime Self-Defense Force interoperability.

"As we look to the future, the strength of our alliance provides a foundation for even greater interoperability," said Ferguson. "My meetings today highlighted our common approach to the security challenges of the region. I look forward to traveling to the rest of the country and visiting our Sailors."

Ferguson is scheduled to hold several all hands calls and meet with Sailors at Naval Air Facility Atsugi, Fleet Activities Yokosuka aboard the forward-deployed aircraft carrier USS George Washington (CVN 73), and Fleet Activities Sasebo. During these engagements, Ferguson will answer questions and discuss the importance of the Forward Deployed Naval Forces and the challenges faced by Sailors in Japan such as the effects of sequestration and ongoing budget uncertainty.

"As we continue to work through the budget process in Washington, we will remain committed to the readiness of forces operating forward as well as our family support programs."

The captain of a U.S. aircraft carrier relieved of his command after seeking stronger measures in response to a coronavirus…