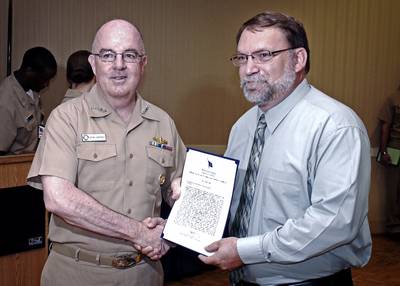 Ponce, formerly an amphibious transport dock ship, was refitted by MSC in approximately five months as an interim Afloat Forward Staging Base and deployed June 1 to U.S. Central Command.

All personnel honored during the ceremony were presented with plaques incorporating a small piece of wood dunnage planking used aboard Ponce before its refit. They also received mugs emblazoned with Ponce's crest, which were donated by Rear Adm. Brian LaRoche, deputy commander, MSC.

Ponce's quick conversion to an AFSB(I), with major work occurring February 13 to April 15 at MHI shipyard in Norfolk, represents a true success story for MSC and the Navy, Harvey said during his remarks.

"The work done by the individuals recognized today was key to giving Ponce a second life and provided significant savings for taxpayers. We are very proud of what you have accomplished and are here to formally thank you for your contribution to our Navy and to the men and women that deployed on USS Ponce," said Harvey.

Once in theater, Ponce will support mine counter-measure and coastal patrol ships, and aircraft operations. The ship also has the capability to provide flexible support as needed for embarked detachments of personnel when requested by USCENTCOM and U.S. 5th Fleet.

"Refitting USS Ponce from an LPD to an interim afloat forward staging base in five months required significant dedication from the MSC team members we recognized," Buzby said. "Thanks to the efforts of our people, Ponce got underway on schedule. I couldn't be prouder that once again, MSC delivered."