Palfinger Crane Onboard Allure of the Seas 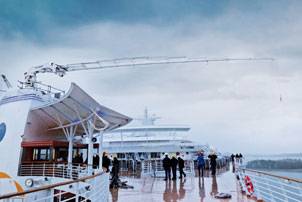 The Allure of the Seas is the second and latest ship in the Oasis class. On 16 decks it has space for more than 5,400 passengers and 2,100 crew. A Palfinger PK 150002 marine crane is used for transporting and planting trees onboard the ocean giant.

The American shipping company Royal Caribbean Cruises and the South Korean STX Group signed the contract for the construction of the sister ship to the Oasis of the Seas in 2007. The Allure of the Seas was officially handed over to Royal Caribbean Cruises last November. With a length of 1,184 ft it is the world’s biggest cruise vessel. The Allure of the Seas cruises the western and eastern Caribbean calling in at Nassau (Bahamas), Charlotte Amalie (St. Thomas) and Philipsburg (St. Maarten). Its home port is Port Everglades in Fort Lauderdale (Florida).
The Allure of the Seas is regarded as a floating architectural marvel. The cruise ship has seven different lifestyle areas: the Central Park, the Boardwalk and the Royal Promenade, the Pool and Sports Zone, the Vitality at Sea fitness centre, the Entertainment Place and the Youth Zone, where various activity facilities, from a climbing wall and a basketball pitch to a surf simulator and a diving pool, can be enjoyed by guests. Numerous stages for musical and ice-skating performances round off the entertainment on offer.
The huge Central Park impresses with lots of cafés and shops and especially with its fine botanical garden, where more than 12,000 tropical plants flourish. The garden contains over 50 trees, countless palms and bamboo bushes. The PK 150002 M crane was installed to help look after the trees and plants. It also assists with the exact positioning of palms in the idyllic pool landscapes.
The Oasis of the Seas was equipped with an identical crane in 2009. This special marine crane has an outreach of 88.5 ft and a cable winch with a length of over 120 metres. To ensure that the daily gardening work proceeds smoothly the crew responsible for the Central Park received extensive training in how to operate the crane in November 2010.