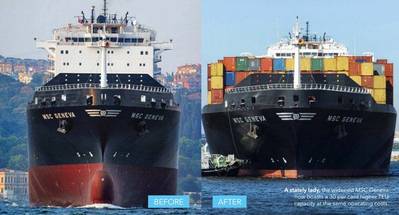 In an unprecedented endeavour, the ship manager Reederei NSB is widening its Panamax-class container vessels. DNV GL, the class in charge, is on board, says a report in DNV GL, Maritime Impact.

Too young for scrapping, too old to compete: Roughly 500 Panamax-class container ships are currently less than ten years old, barely half their useful life. But facing overcapacities, low charter rates and ierce competition, the Panamax class is under intense pressure.
Compared with state-of-the-art and much more capacious newbuildings, its prospects are dim.
This is mainly due to the way these vessels were designed. To pass the old locks of the Panama Canal, they were built with unusual dimensions – long and thin and with a large amount of ballast water to compensate the poor stability.
“In addition, Panamax ships are equipped with stronger engines that achieve their highest eficiency when operating at higher speeds, rather than slow steaming, which is more common today,” says Marcus Ihms, Ship Type Expert for Container Ships at DNV GL – Maritime.
So shipowners try to make their leets more competitive by undertaking minor and major ship conversions (see below). Reederei NSB of Buxtehude, Germany, is causing quite a stir with the idea of widening three of its Panamax container vessels: MSC Geneva went back into service in July of this year after undergoing the procedure, her sister ship MSC Lausanne was delivered in late October, and MSC Carouge should be completed by the end of January 2016.
“No one has ever cut a container ship lengthwise from the superstructure to the bow to widen it,” says Tim Ponath, Chief Operative Oficer of Reederei NSB. “We are very proud of our team who demonstrated the viability of our concept.”
Innovative and technically sophisticated, this concept was developed jointly by NSB and the Hamburg-based Technolog GmbH. After separating the fore and aft body from the cargo hold in dry dock, the cargo hold is cut in half lengthwise and pulled apart.
The new centre sections are inserted and connected to the existing part. “The main idea behind this innovative method is cutting the hull in the least stressed areas and signiicantly increasing both the container intake and stability by widening it,” says Lutz Müller, Senior Technical Consultant at NSB and one of the key initiators of the project.
Providing guidance: The conversion is carried out by Huarun Dadong Dockyard (HRDD), China. DNV GL, the classiication society in charge of the ships, was involved from the early stages.
“This is a major conversion project,” emphasizes Ihms. This means that all classiication and lag state rules in effect at the time of conversion have to be observed. It is important to discuss with the lag state and the class, what rules must be adhered to under all circumstances, and what parts of the ship can be handled according to existing standards rather than new requirements.
“Our Class Note for Conversion of Ships provides the necessary guidance to owners as well as engineering companies during the design phase,” Ihms points out. For example, in the case of MSC Geneva and her two sister ships, the anchor equipment had to be adapted, as a widened ship is heavier and offers more resistance to wind. “According to our well proven method, additional chain lengths can provide more holding force. Thereby, the retroit of the entire winch system can be avoided without jeopardizing the anchoring capability,” Ihms reports.
From anchor equipment and ship strength and stability through to statutory compliance and cargo lashing, close collaboration between all project stakeholders was crucial for the success of this world premiere.
Added beneits: A conversion adds up to four container rows to the cargo hold, increasing the container capacity by about 30 per cent. In addition, it improves engine eficiency when combined with an optimized propeller, and bolsters stability. “Stability increases exponentially when you widen a ship,” Ihms explains. As an added beneit, the required ballast water per loaded container could be reduced by half.
The IMO Energy Eficiency Design Index (EEDI) achieved will equal that of a newbuilding and meet EEDI regulations as per 2025. The life-extending surgery will pay for itself within four years – so in the end it has all been well worth the effort, Ihms assures.

Norwegian shipbuilder Vard announced it has secured a NOK 500 million $47.8 million) contract to design and build a stern…