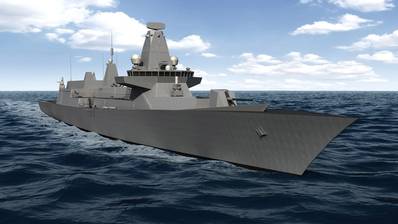 <p>Portsmouth, UK - Paramarine advanced marine design software, developed by QinetiQ GRC, is being used by BAE Systems&rsquo; Maritime &ndash; Naval Ships business, in the assessment phase for the design of the latest Royal Navy frigates.&nbsp;</p> <p>Paramarine is being used for early stage design and structural development of the Type 26 Global Combat Ship (T26 GCS). The T26 GCS is a globally deployable and sustainable warship, which will form the spine of the Royal Navy&rsquo;s future fleet.</p> <p>&ldquo;We are charged with developing a design which generates the most effective balance of cost versus benefit,&rdquo; said Chris Muskett, Engineering Manager Hull &amp; Structure, BAE Systems&rsquo; Maritime &ndash; Naval Ships. &ldquo;We develop different configurations to assess the impact on the cost of building the ship. Paramarine enables us to develop and test scores of options in the early design stage and, at the same time, we are able to very rapidly gain a powerful insight into the impact of structural changes to aid the decision-making process.&rdquo;</p> <p>Paramarine has been and is used extensively across BAE Systems on projects such as the Astute class of submarines, Type 45 Royal Navy ships, and the new aircraft carrier programs. Thousands of concept vessels have been modelled and their stability analyzed using Paramarine. It is used by many of the world&rsquo;s leading shipbuilders, as well as many of the world&rsquo;s leading universities, including the Massachusetts Institute of Technology and University College London.<br /> <br /> <br /> <br /> &nbsp;</p>