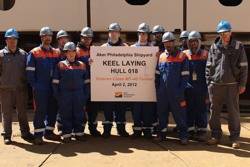 The small ceremony was conducted with the most recent class of the shipyard’s Apprenticeship Program and two apprentice graduates who have risen to the position of supervisor. The Apprenticeship Program is a three year, accredited program administered by the shipyard that provides a combination of classroom and on-the-job training to create the next generation of shipbuilders.

Following long held shipbuilding tradition, coins were placed on one of the keel blocks that support the vessel during construction before the section of the ship was lowered into place. These coins are a ceremonial sign of good fortune and safe travels.