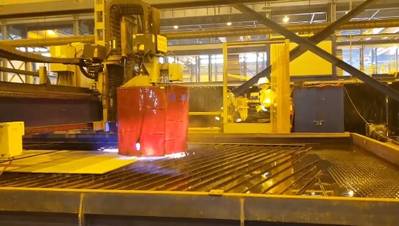 Philly Shipyard on Wednesday marked the start of fabrication for the second of five planned National Security Multi-Mission Vessels (NSMV). The purpose-built, state-of-the-art training ships will be used by America’s state maritime academies.

The first steel plates cut by the yard’s state-of-the-art plasma cutting machine will be later joined into a double bottom, mid-ship section.

Following the initial steel cutting for NSMV I in December, this event signifies the second major construction milestone in the MARAD-led NSMV program.

In May 2019, MARAD selected TOTE Services as vessel construction manager for the program, and in April 2020, the latter awarded Philly Shipyard a contract to construct up to five NSMVs with an initial order for two vessels. In January 2021, MARAD authorized TOTE to execute a subsequent order for the third and fourth ships in the series. The first NSMV has a target delivery in early 2023.

Designed to equip young American mariners with modern and adaptable training platform, the NSMV will feature numerous instructional spaces and a full training bridge with accommodation for up to 600 cadets to train in a first-rate maritime academic environment at sea.

Along with serving as an educational and training platform, the NSMV will also be available to uniquely support federal government efforts in response to national and international disasters such as hurricanes and earthquakes. In this role as a National Defense Reserve Fleet vessel, the NSMV will incorporate medical capabilities, a command and control platform, and berthing for up to 1,000 first responders and recovery workers. The vessel’s roll-on/roll-off ramp and crane to facilitate container storage capabilities will enable it to provide critical support equipment and supplies to those in need.