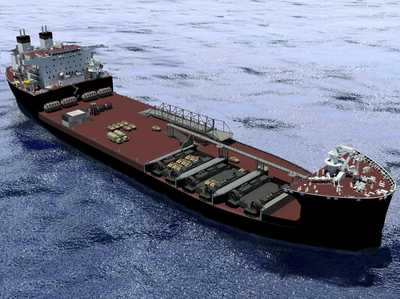 General Dynamics NASSCO today hosted a keel laying ceremony for the USNS Lewis B. Puller, the third ship in the Mobile Landing Platform (MLP) class. The ship is named in honor of Lewis B. Puller, the most decorated U.S. Marine in history and the only one to be awarded five Navy Crosses. Mrs. Elizabeth Glueck was the honoree for the keel-laying ceremony. She is the wife of Lieutenant General Kenneth J. Glueck, Jr., deputy commandant for Combat Development and Integration; commanding general, Marine Corps Combat Development Command; and commander, U.S. Marine Corps Forces Strategic Command.

Mrs. Glueck validated the ship’s keel by welding her initials onto a steel plate which will be permanently affixed to the ship, remaining with the vessel throughout its time in service.

MLP-3 is the first ship of the class to be configured as an Afloat Forward Staging Base (AFSB). Delivery is scheduled for the second quarter of 2015.

“This third Mobile Landing Platform ship, configured as an AFSB, will provide significant new capability to the Navy and Marine Corps’ Maritime Prepositioning Force,” said Fred Harris, president of General Dynamics NASSCO. “The NASSCO team will continue to efficiently build and deliver these ships to help strengthen the forward presence of the Navy.”

The MLP AFSB is a flexible platform and a key element in the Navy’s large-scale airborne mine countermeasure mission. The ship is designed to facilitate a wide variety of future mission sets in support of special operations. With accommodations for 250 personnel and a huge helicopter flight deck, the MLP AFSB will provide a highly capable and affordable asset to the Navy and Marine Corps.