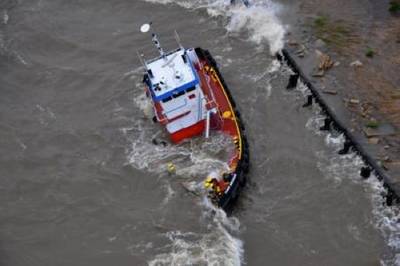 US Coast Guard 8th District says that it has rescued 3 crewmembers aboard the (uninspected) tugboat 'UTV Todd Michael' after it grounded on the rocks near the Lakefront Airport on Lake Pontchartrain. [The vessel towed appeared to be drifting nearby.]

"Once on scene, it was apparent that the grounded vessel offered many hazards for retrieving the survivors safely," said Petty Officer 3rd Class Ari Markle, an aviation survival technician at Air Station New Orleans. "Due to our diligent training and a dedicated crew, we overcame the hazards to help get them immediate medical attention." Their condition was unknown at the time of this report.