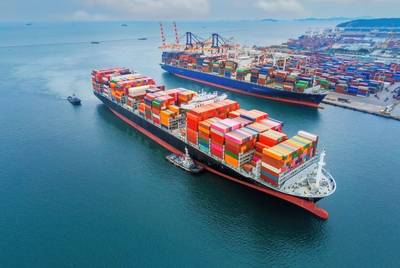 Dubai-owned ports giant DP World reported on Thursday a record $721 million first-half profit boosted by elevated shipping rates but said it expected its profit, revenue, and container growth rates to moderate in the rest of the year.

The company, one of the world's biggest port operators, said profit climbed 51.8%, up from $475 million in the same period a year ago.

The shipping industry has seen record profits recently due to tight shipping supply caused by a surge in consumer demand and pandemic-linked supply chain disruptions.

DP World, which also owns logistics parks, handled 39.48 million shipping containers in the first half, a year-on-year growth of 2.3%.

But the ports giant, which saw first-half revenue rise 60.4% to $7.9 billion, said it expected its growth rates to moderate in the second half amid an uncertain near-term outlook.

"Nevertheless, we remain positive on the medium to long-term fundamentals of the industry and DP World's ability to continue to deliver sustainable returns," he said in a statement.

DP World's caution comes amid concerns the global economy may be heading towards recession, in part due to high inflation and the fallout from Russia's invasion of Ukraine.

The IMF said last month those risks were materializing as it cut its global growth forecast for this year to 3.2%.