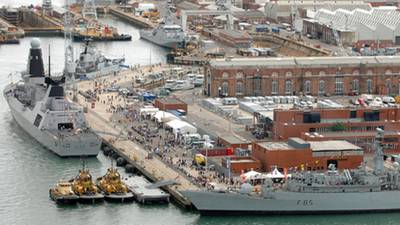 Britain has appointed agents to find a tenant for the country's historic Portsmouth dockyard, which is due to be vacated by BAE Systems by the end of the year as the defence contractor shuts its shipbuilding activities in the city.

BAE's announcement in November last year, which will affect 940 jobs, signalled the potential end of more than 500 years of shipbuilding in Portsmouth on England's south coast. The company plans to consolidate operations at its yards in Glasgow, Scotland.

Property consultants Lambert Smith Hampton said on Friday it will market the 13-hectare site to companies in Britain and abroad, and expects considerable interest from those operating in marine, defence, aerospace and general engineering sectors.

It said it had already approached possible tenants about the site, which is within the city's Royal Navy base.

A prospectus published by the Ministry of Defence estimated the site's rateable value - the annual rental value on the open market - at 3.47 million pounds ($5.76 million). It said the site's use would need to meet security requirements, and that it was keen to preserve jobs affected by BAE's departure.