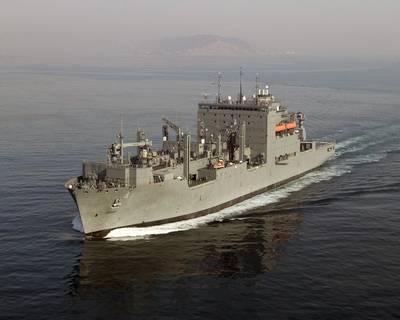 USNS 2ND LT John P. Bobo (T-AK 3008) made a final port visit to Rota, Spain in late September, marking the official disestablishment of the 28-year-old squadron. The other ships and personnel assigned to MPS Squadron One returned to the United States earlier this year, where they currently maintain a reduced operating status. MPS Squadron One was one of three squadrons belonging to MSC's Maritime Prepositioning Force (MPF), established in 1984 by the Department of Defense to carry U.S. Marine Corps equipment and supplies closer to an overseas threat or operation.

"These ships, and most importantly, the people who supported MPS Squadron One during its existence, made an invaluable contribution to the Maritime Prepositioning Force, and today we honor that legacy as we transition to support the Navy and Marine Corps of our future," said Keith Bauer, MSC's Prepositioning Program manager. The ships of MPS Squadron One were forward deployed to the Mediterranean Sea in 1995, where they maintained a longstanding presence conducting countless port visits and numerous multi-national exercises to support evolving warfighter needs.

"Our squadron motto 'on station and ready' was attained in exercises and port visits that allowed us to interact with nations throughout Europe and Africa," said Navy Capt. Ricks W. Polk, MPS Squadron One commander.

"MPS Squadron One has truly been a key player in theater cooperation and engagement efforts in the Mediterranean, Eastern Atlantic and Baltic regions for more than a quarter of a century," he said.

The squadron was home to a number of other prepositioning ships throughout its existence.  In its final days, MPS Squadron One consisted of four ships: Bobo, the flagship; USNS PFC Eugene A. Obregon (T-AK 3006), the alternate flagship; USNS LCPL Roy M. Wheat (T-AK 3016) and USNS SGT Matej Kocak (T-AK 3005). The remaining ships of MPS Squadron One will become MSC Surge Sealift assets Oct. 1.

"Ultimately, these changes are designed to enhance the core of the program: enabling warfighter readiness," said Mike Neuhardt, MPF project officer. "The remaining MPF squadrons will continue to have global reach, and changes in doctrine, ships and squadrons will give them seabasing-enabled capabilities they never had before," he said.