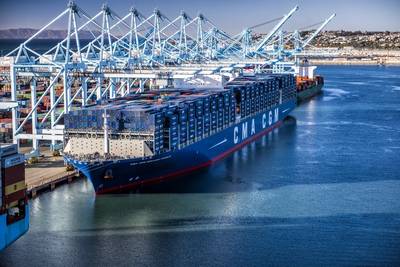 France's CMA CGM, the world's third-largest container shipping group, will expand its presence in Iran after signing a landmark deal on Thursday with the Islamic Republic of Iran Shipping Lines (IRISL).

Many Western businesses are seeking to invest in Iran, a nation of 80 million people, after many sanctions linked to the Persian nation's nuclear program were lifted this month.

The preliminary agreement between CMA CGM and IRISL, signed during a visit to Paris by Iranian President Hassan Rouhani, covers vessel capacity sharing, joint operating of routes, and cooperation in using port terminals, the French government said in a statement.

The partnership is the first struck between a major international line and IRISL and marks a further resumption of shipping trade after CMA CGM and some competitors resumed port calls in Iran last year.

Cooperation would focus on sharing capacity between CMA CGM and IRISL's vessels, the French group said in a separate statement, adding that the agreement was subject to other sanctions that are still in place.

"The progressive lifting of sanctions should bring strong growth in trade between Iran and the rest of the world. This agreement opens new opportunities for CMA CGM to expand in this region," it said.

IRISL is Iran's top cargo and container carrier and was taken off the sanctions list earlier this month.

Iran had once depended on foreign ships for much of its imports. But since 2012, when sanctions led to an exodus of Western shipping firms, it relied more on land routes and its own commercial fleet, leading to supply disruptions.

CMA CGM and Evergreen of Taiwan, the world's No. 4 player, were the first to resume direct services to Iran last August.

The French group now operates three direct services to and from Iran, linking the country to Africa, Asian and India. It separately offers indirect services from northern Europe and the Mediterranean to Iran, done through transhipments via the United Arab Emirates, it said.

CMA CGM, privately controlled by the Saade family, is set to reinforce its global reach after agreeing in December to acquire Singapore's Neptune Orient Lines, a deal it says will help it overcome a shipping downturn.

Prices for cargos have touched record lows this year amid global concerns on China's economic slowdown and an oversupply of cargo ships.