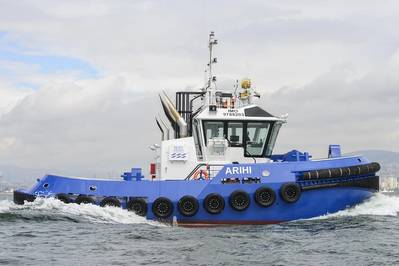 Canadian marine engineering services firm Robert Allan Ltd (RAL) said that it has been awarded a contract by Modutech Marine Inc. of Tacoma, Washington to design a new version of the commercially successful RAscal 1800-Z tugs for the United States Navy.

The new RAscal tug (with an option for one more) will be built by Modutech Marine Inc at their facility in Tacoma.

Known as the YT 815 the tug will be very similar to ten RAscal 1800-Z tugs which have been built by Sanmar Shipyards in Turkey and already delivered to commercial clients in UAE, Turkey, Spain, and New Zealand.

The design for the US Navy will include updates to suit new EPA Tier 4 engines and associated systems, extensive fendering above and below the waterline to handle US Navy surface ships, submarines and barges as well as incorporating feedback from operators of the existing Z-Tech 4500 tugs.

Wherever possible commonality in arrangement and systems to the existing Navy’s tugs Z-Tech 4500 tugs is being utilized to minimize training hours. The tugs are configured essentially as “day-boats” but also provide accommodation for a crew of up to four persons. Construction of the first tug is to commence in 2020.