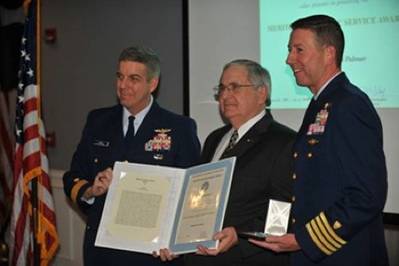 Making the presentation on behalf of the Commandant, Rear Admiral D. B. Abel spoke as follows:

As a highly respected member of and advocate for the maritime industry and perpetual source of historical knowledge for the Port of Boston, Captain Palmer is an avid proponent for safety of life on the waterway through his promotion and facilitation of communication and collaboration among waterways users. Throughout his distinguished career, Captain Palmer demonstrated superb leadership in numerous strategic regional maritime forums such as the Boston Area Maritime Security Committee and the long- standing Boston Port Operators Group. His in-depth understanding of the port and his advocacy for critical maritime safety forums has served as a catalyst for the stand up of the newly formed Massachusetts Bay Harbor Safety Committee.

Additionally Captain Palmer remains extremely active throughout the port as a distinguished member of the Salem Marine society, treasurer of the Propeller Club Port of Boston, and Past President of the Boston Marine Society, the world’s oldest marine society. Captain Palmer’s leadership has been vital in uniting diverse and competing maritime interests during the multi-year $125 million dollar project to replace the Chelsea Street Bridge, which was deemed an obstruction to navigation by the Commandant of the Coast Guard in 1992. With significant support and assistance from Captain Palmer, this hazard to navigation was replaced with a state-of –the-art bridge and a corresponding two-fold increase in the width of the navigation channel, all without disrupting the critical flow of petroleum product through the Chelsea River.

His substantial knowledge and expertise was invaluable in the execution of the three day Ports and Waterways Safety Assessment workshop in 2011 which was designed to evaluate major waterway safety hazards, estimate risk levels and identify potential mitigation issues in the Port of Boston. Captain Palmer’s contribution to this process led directly to the establishment of a regional waterway strategic plan that will serve to focus stakeholder efforts through the prioritization of waterway safety and enhancement initiatives.

Captain Palmer’s vast experience in the port operations and vessel management was also critical in the safe and successful execution of the U.S. Navy’s bicentennial commemoration of the War of 1812; designated a Marine Event of National Significance. Captain Palmer facilitated the safe and efficient arrival, departure, and in-port management of over 25 U.S. and international military vessels and tall ships over the eight day high profile event. Captain Palmer’s dedication and devotion to the highest ideals of patriotism and duty are most heartily commended and are keeping with the highest traditions of the Coast Guard and of public service."