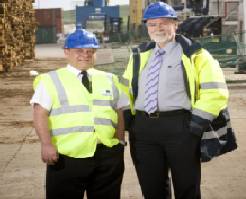 Aberdeen Harbour Board has announced the completion of a £4 million refurbishment project at Commercial Quay East while welcoming the arrival of a new £1 million workboat.

The project, part of Aberdeen Harbour Board’s £65 million development plan, included refurbishing the quay’s existing, 170-metre-long wall, before installing replacement shipping water points, rainwater drainage system and ducts for possible future services. The quay is now fit for purpose for the demands of today’s cargo handling equipment and cargoes. It has since been deepened to 7.5 metres. This will allow the port a greater degree of flexibility and enable the harbour to support larger projects including land based and offshore renewable energy.

Designed by Macduff Ship Design and built by Macduff Shipyards, it is equipped with a range of features, including a multi-beam hydrographic survey suite, deck crane, twin 350hp engines giving a speed of 9.6 knots and bollard pull of 9.5t, which will enable it to undertake a variety of tasks; from debris removal and bed levelling work to hydrographic surveys and occasional pilot duties.

Engineering director, Ken Reilly, said: “As part of our development strategy, the refurbishment of Commercial Quay East is just one part of the larger vision we have for Aberdeen Harbour in maintaining the high level of service we currently provide for our customers.

“The harbour is an integral part of the North-east’s infrastructure and continued investment, whether it be for the refurbishment of facilities or the provision of new vessels such as the workboat, will cement our reputation as being the centre of activity for the energy industry’s marine operations in North-west Europe.”

Ray Shaw, operations director and harbour master at Aberdeen Harbour, added: “It is important for us to continue to provide the best service and facilities for our customers. The new vessel will make an important contribution to harbour activities and demonstrates our commitment to ensuring Aberdeen Harbour remains one of the UK’s busiest and most efficient ports.”