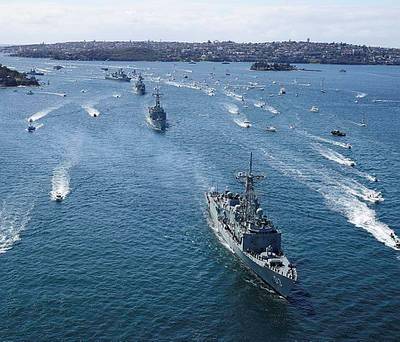 The final phase of the Royal Australian Navy’s (RAN) International Fleet Review drew to a close today, with the completion of Exercise Triton Centenary 2013.

Triton Centenary was held in two parts. The first was held in the East Australian Exercise Area from 23 September to 3 October 2013 and was a major multi-lateral training opportunity. This phase provided important interaction that got the ships working with each other ahead of the Fleet Review.

On October 11, 2013, following a successful Fleet Review, 14 ships from Australia, France, Japan, Malaysia, New Zealand, Papua New Guinea, Spain, Tonga and the USA sailed from Sydney to commence the second phase of the exercise. This included a number of more complex exercises, which practiced all facets of coalition maritime operations.

The ships were supported by Seahawk helicopters from the Navy’s 816 Squadron, fast jet, maritime patrol and airborne early-warning aircraft from the Royal Australian Air Force 76 Squadron, 81 Wing, 92 Wing and 2 Squadron, along with others from the USA, New Zealand and Pakistan.

“A major highlight was the significant number of Combined Anti-Submarine Exercises conducted with the Collins Class submarine HMAS Farncomb.

“All the participating nations gained familiarity with each other’s capabilities, warfare procedures, professional standards and safety. Many personnel exchanges were conducted, allowing sailors and officers to see first-hand how other Navies operate,” Commander Cannell said.

“Exercising with partner nations in exercises like Triton Centenary is a tangible way that navies work together.

“Maritime security is an inherently cooperative and collaborative venture.  By exercising together we work towards providing a stable and cooperative security environment, which protects our ability to trade,” Commodore Mead said.