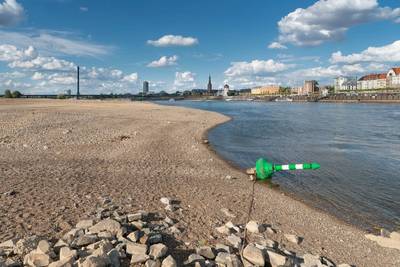 Around 20 ships are stuck in traffic along Germany's river Rhine, where low water levels have already impeded shipping this summer, after a vessel's engine failure closed part of the waterway, authorities said on Wednesday.

A vessel with a 1,660-ton load was forced to drop anchor due to an engine failure, closing traffic between St Goar and Oberwesel, river police said.

"It's backing up," a spokesperson for the Federal Waterways and Shipping Administration told Reuters. "The berths are full all the way to Mainz." Mainz is about 50 kilometres south-east of Oberwesel.

Downstream was affected more. Traffic headed upstream has resumed since 1300 CET, the spokesperson said, adding that it could take another couple of hours before the other direction was freed up again.

The authorities stressed that the build-up on Wednesday was not caused by reduced water levels, which have hit record lows at some points due to a lack of rain.

Weeks of baking temperatures and scant rainfall have drained water levels in the river, Germany's commercial artery, causing delays to shipping and pushing freight costs up. The disruption could knock half a percentage point off economic growth in Europe's biggest economy this year, say economists. Read full story

In Berlin, the city government told residents to save water.

"Berlin has been supplied by its own groundwater for over 100 years, and we will have to do something to keep it that way," said Environment Senator Bettina Jarasch.

People should avoid watering gardens during the day and take short showers rather than baths, she said.

The capital is not yet planning any bans although they may be considered as a last resort, said Jarasch.

Rhine shipping authorities said they expect the situation to improve in the coming days as rain is forecast for the region and water levels could rise "by 50 centimeters or more" by the end of the next week.

Water levels at the Kaub reference point WL-KAUB were at 34 centimeters on Wednesday. Levels in the 30-35 centimeter range are acceptable for shipping - if expensive and with big losses in loadable cargo so as not to weigh down vessels too much.

A number of barges have gone aground in the Lower Mississippi River due to low water levels, the U.S. Coast Guard said.There…