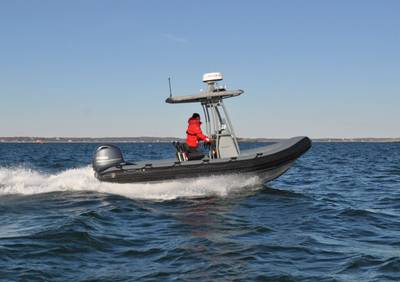 Having recently taken delivery of two new RIBCRAFT 5.85 rigid inflatable boats (RIB), the California Department of Fish and Wildlife awarded the Massacusetts-based builder another contract, to supply and deliver shipboard RIBs for its fleet of long range fisheries patrol boats.

The RIBs already delivered will be used by the agency's Southern District, which covers all of Santa Barbara, Ventura, Los Angeles and San Diego counties. The vessels will be operated by one or two wardens for patrol and enforcement operations. At just over 19’, these RIBs can be easily trailered and launched while still delivering excellent open water performance along the southern California coast, according to the builder.

RIBCRAFT said it worked with the department to build a boat that meets their diverse operational requirements. Featuring a forward positioned center console with front bench seat, two side by side Shockwave suspension seats, heavy duty T-top with windscreen, and a complete Raymarine electronics package. The 19’ RIB provides a comfortable platform for long patrols in both open and protected waters, while offering an open deck for officers and gear. Powered by a 115-horsepower Yamaha, this 5.85 will reach speeds in excess of 40 miles per hour.

For the newly ordered RIBs, the department again will utilize the 19’ RIBCRAFT 5.85, but with a slightly modified layout for shipboard operations. Featuring a center console with a radar arch, integrated hoisting fittings, and a 115-horsepower Yamaha four-stroke outboard, these RIBs will be deployed for boarding and response operations up to 200 miles offshore.

Originally designed as a surf rescue craft, the RIBCRAFT 5.85 is small enough to maneuver in shallow waters and be easily deployed and operated, yet large enough to handle most sea conditions and carry ample crew and gear.