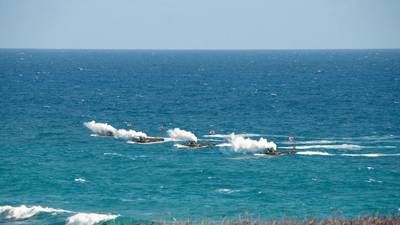 The 2022 biennial, multi-national Rim of the Pacific's (RIMPAC) exercise has come to a close.

RIMPAC 2022 featured a wide range of capabilities--projecting the inherent flexibility of maritime forces and helping to promote a free and open Indo-Pacific, and took place in and around the Hawaiian Islands and Southern California, June 29 to Aug. 4.

During the exercise, 26 nations, 38 surface ships, four submarines, nine national land forces, more than 30 unmanned systems, approximately 170 aircraft and more than 25,000 personnel trained together while operating in and around the Hawaiian Islands and Southern California, June 29 to Aug. 4.

“By coming together as ‘Capable, Adaptive Partners,’ and in the scale that we are, we are making a statement about our commitment to work together, to foster and sustain those relationships that are critical to ensuring the safety of the sea lanes and the security of the world's interconnected oceans,” said RIMPAC 2022 Combined Task Force Commander, U.S. Navy Vice Adm. Michael Boyle.

An amphibious assault was conducted on Aug. 1 at the Marine Corps Base Hawaii in Kaneohe Bay, Oahu, and served as a capstone event as RIMPAC drew to a close.

The ground assault included forces from the Republic of Korea, Mexico, Sri Lanka, Chile, Indonesia, Malaysia, the Kingdom of Tonga and the U.S.